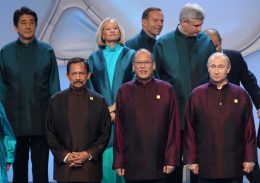 World leaders don Chinese dress at an APEC conference in Beijing in 2014. Other world powers do as the Chinese say, not vice versa.

The American public is starting to take notice of corporate submission to China. National Basketball Association (NBA) officials and players issued several effusive apologies to the Chinese government last week after the general manager for the Houston Rockets showed support for the Hong Kong protests.

Americans were outraged over this capitulation and the NBA was pilloried in the media. China did not accept the NBA’s apologies and cancelled several league events and television contracts. The Communists particularly didn’t like league officials standing up for free speech. “We believe that any remarks that challenge national sovereignty and social stability are not within the scope of freedom of speech,” Chinese broadcaster CCTV declared [2].

Blizzard Entertainment also bent the knee [3] to China last week. The video game titan banned one of its most popular gamers and confiscated his winnings after he voiced support for the Hong Kong protests.

These public capitulations follow Capitol Hill’s worries that Big Tech cooperates way too much with China. Several senators have sent letters to tech companies warning about the dangers of this close cooperation, from developing tech to oppress the Uighurs to aiding in espionage activities. Those letters have fallen on deaf ears.

The American backlash against the NBA and Blizzard probably won’t convince these corporations to change their policies. They’re too tied to the Communist state and they don’t want to alienate a large customer base. There’s more to gain by bowing to China than virtue-signaling against it.

There are some important takeaways from this situation.

First, globalism isn’t going according to plan. Global capital was supposed to spread liberal democracy and its values to the whole world. The idea was that China would become more like the West thanks to Hollywood and major league sports. The Chinese would embrace free expression and radical individualism. Like all the people of the world, they would simply see themselves as individuals and consume whatever global capital shoved down their throat.

This kowtowing to China contradicts this notion. China is becoming more consumerist and more embedded in global capital, but it hasn’t given up on its intense nationalism or identity. Instead, it’s forced global capital to accommodate it. Film studios must remove and censor any problematic content so as to not offend Chinese sensibilities. The first major sign of this was the edit of the Red Dawn remake to show North Korea, rather than China, conquering America. This made no sense, but it had to be done to please the Chinese. Likewise, the new Top Gun removes Taiwanese and Japanese back patches from Tom Cruise’s jacket out of deference to the Chinese.

The NBA is showing the same slavish groveling right now. Players and coaches who always speak out against President Trump, racism, and white privilege have chosen to stay silent about China. Star NBA player Stephen Curry hinted at the change when he said they’re “building a business [4]” in China. They know wokeness doesn’t hurt their bottom line in the West, but it does when it extends across the Pacific.

It’s amazing to see an overwhelmingly black and progressive sports league gladly spout Chinese propaganda. This is the same league that banned the term “owner” to describe team owners and imposed a lifetime ban [6] on one owner who told his girlfriend not to bring black guys to games. Now it’s kicking American fans out who hold up pro-Hong Kong signs at games.

The second big takeaway is the limits of woke capital. It’s a purely Western phenomenon; corporations aren’t dumb enough to virtue-signal in areas that won’t tolerate it. Businesses will promote Pride Month in London, but shut up about it in Dubai. They will boycott states that pass laws against gender-neutral bathrooms, but partner with nations that execute homosexuals. They’ll browbeat Westerners with anti-racism agitprop, but provide the technology the Chinese need to build concentration camps.

This hypocrisy proves that corporations ultimately care more about money than values. That shouldn’t surprise readers, but it does contradict the facade constructed by woke global capital. Go to any corporate Website and you’ll be inundated with diversity and inclusion propaganda. Advertisements show the erosion of traditional gender roles, mixed-race couples, gay families, and mandatory racial diversity. Everything is reliably woke and hostile to tradition.

Corporate executives probably do believe their own bullshit, but it doesn’t drive them. They think the virtue-signaling is good for business and that it helps them appeal to customers. But they’re not about to cut an ad lecturing China about Han privilege.

Corporations censoring for China is not without precedent. The commentators furious over the NBA’s actions have largely ignored or encouraged companies to punish employees who espouse politically incorrect positions. It may seem crazy that Marriott would fire a random employee in Nebraska [7] for liking an anti-China tweet . . . until you realize companies do that all the time.

The Houston Rockets would have fired their general manager if he had tweeted a “build the wall” meme or said we should reduce immigration. Corporations don’t respect free speech. If you run afoul of progressive dogma, you face unemployment and widespread condemnation. It’s not surprising that corporations would treat criticism of China in the same manner. At the very least, it makes more business sense than firing employees to appease the antifa. China has over a billion people; the antifa is comprised of a few thousand freaks, at most.

While the American public is united in disgust at corporate subservience to China, there are no real solutions to the problem. Everyone wants us to take China on, but these same pundits and think-tankers who encourage this combative attitude also oppose every idea that could limit China’s growth. The DC think-tank blob and punditocracy are universally opposed to tariffs because it would slightly harm America’s economy. Tariffs are one of the few ways America can strike back at China, and yet they’re seen as bad because they might cause us to pay higher prices on goods. And it’s hard to attack the NBA when the league’s critics prefer appeasing China to harming business.

The big solution to the Chinese problem is . . . virtue-signaling. Seriously. The experts don’t want us to do anything that may inconvenience global capital, so we’re stuck with platitudes in support of Hong Kong and the Uighurs. China doesn’t care if every senator condemns their human rights abuses. China laughed at Bill Clinton [8] when he tried to make them respect human rights over twenty years ago; they’re not about listen today, when they have an even more powerful economy and military.

Trump should be commended for wanting to impose tariffs on China. He gets flak for not virtue-signaling in favor of Hong Kong, but actions speak louder than words. He’s the only American politician who is serious about countering Chinese power; everyone else thinks a strongly-worded press statement will change the Commies’ behavior.

There are things to admire in China’s behavior. It’s a nationalistic culture that demands respect and doesn’t tolerate insults. In some ways, it’s refreshing to see global capital being forced to respect China and their demands to butt out of their own affairs. It would be nice to see America and other Western nations make multinational corporations respect their people’s history and culture. Instead, multinationals refuse to print the Betsy Ross flag on their products. Maybe one day, we will get a Mao shoe, though.

China wields so much power because it refuses to sacrifice ethnonationalism in favor of globalism. It provides the products for the megacorporations and participate in the free market, but only if global capital respects Han domination. Otherwise, China is certainly willing to part with some of the entertainment and products it receives and endure economic discomfort to advance its own interests. The Asian giant doesn’t care if the world condemns their actions; it will continue to oppress the Uighurs and refuse to cave to Hong Kongers, anyway.

China acts like a serious country. That’s why it seems prepared to dominate the world stage. America and the West favor global capitalism more than their own interests, and allow the countries that refuse to make that compromise to force the rest of the world to bow to them.

The West can only defeat China if it stops bending the knee to globalism. China exploits globalism for its own gain, while we slavishly worship it. This must change, or we will all one day stand for the Chinese national anthem.