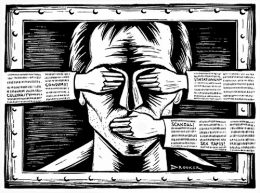 We all know that there is nothing new or special about the use of state power to silence dissent. And if history has shown us anything, it is that those who decry such actions now rarely hesitate to engage in such activities later, once they have attained power.

This never-ending game makes hypocrites of us all – or does it? If we acknowledge that power is in and of itself a worthy goal – the necessary precondition for practical and enforceable codes of behavior, and indeed, the basis for the creation of an advanced society itself – then the game is not one of “hot potato” hypocrisies, but one of nature, like fighting over food or shelter.

White Nationalists fully intend to make use of state power to shape our countries as we see fit once we have attained power, so how do we reconcile the arrest of Greg Johnson and other political dissidents with this position? The desire to do so, to justify this superficial contradiction, is a holdover from ideas of fair play and honor that were only ever valued or useful between whites in the white world; they have little political value in a globalized world under conditions of neoliberal colonial subjectivity.

However, as White Nationalist discussions are, by definition, by and for whites – spaces in which the white world of fair play and honor can still exist – there is metapolitical value in providing analysis for the curious or the unconvinced. And the answer, in its crudest formulation, is power: We had it, they took it, and we are going to get it back.

Greg Johnson should be freed simply because he is one of us; he should be freed because Norway’s indigenous population would benefit immensely from his words, his presence, and the propagation of his ideas across their once great land. He should be freed because he is in Norway on what is effectively a rescue mission. Does the Norwegian state have a right to arrest him? Despite violating the liberal values they claim to hold and possibly their own laws, the answer, from our perspective, is “yes.” But we intend to peacefully and democratically hijack those values and laws in order to substitute a new moral and political culture in which those foreigners and unrepentant race traitors who would deny him the ability to speak are themselves marginalized to the point of abandoning, one way or another, their claims on Norwegian citizenship, participation in Norwegian culture, and any input into the future of Norway.

To accept the notion that we must ensure complete equality among all peoples in our future societies is to accept a universalist conception of world order, which is at odds with national sovereignty, respect for national and local traditions, and the primacy of race, each of which is a foundational concept within White Nationalist thought. By arresting and deporting Greg Johnson, Norway has accepted the first of these principles, merely substituting devolution for evolution, destruction for construction, and social chaos for harmony under the guise of national interest.

No objective person could believe that a mild-mannered, cultured doctor of philosophy who has consistently rejected violence poses a greater physical threat to Norway or any other historically white country than hordes of non-whites draining treasuries and taxing police forces, and yet the latter are met with open arms. The problem with this particular manifestation of Norwegian sovereignty is that it is not the will of the people, but rather the machinations of a hostile elite acting in contradiction to the interests of its citizens. Greg Johnson’s message, when it becomes well-known and understood without dishonest mediation, will be one of liberation and systemic disruption; i.e. vastly positive for the Norwegian nation. From a White Nationalist perspective, it is not the acts of arrest and deportation that are deplorable, but who did them – who exercised this power. It was not the Norwegian people who objected to his presence; the vast majority would likely agree with him on most things. Indeed, this is precisely what the government fears. No, he was arrested by a corrupt system: an octopus of unelected elites, social taboos, propaganda, and brainwashing.

In the long term, the ideas discussed by White Nationalists do indeed pose a threat; not to the Norwegian public, of course, but rather to the power of the Norwegian political, economic, academic, and media elite that is bent on maintaining Norway’s incorporation into the neoliberal world system, and which seeks to reduce the world’s actual human biological and cultural diversity to ashes – most especially as these pertain to whites, which is and always will be our primary concern. The value of Norwegians qua Norwegians is a White Nationalist value; it is emphatically not a neoliberal value. Indigenous peoples do not want to be destroyed anywhere on Earth; races do not want to be destroyed anywhere on Earth. But this is precisely what is happening in Europe and to whites everywhere, in part because our ideas – the ideas of men like Greg Johnson – are being suppressed as “hateful” and “terroristic.” This will not stop anytime soon. It would be ridiculous to suppose otherwise. It will not stop, because we are not in enough positions of power. But note that power can take many forms: A position of power does not necessarily mean a government job or head of a corporation; it can be any social location by which one can exert influence over large numbers of people, or influence a few people who in turn have power over other networks. It can be many different things. Never has social power been so easily available. Taking advantage of this is the nature of the metapolitical struggle: It is a contest for power which we can assuredly win, and from which political power will follow.

It is perfectly rational for the Norwegian government to arrest and deport White Nationalists. Again, they have a right to do so; we are a threat, albeit only to their system of lies and crime. By removing us from their borders, they are effectively acting in accordance with our belief in muscular border enforcement – which is a bit comical, really, and also, in this case, driving traffic to Counter-Currents and selling more copies of The White Nationalist Manifesto, which is even more comical. But it is equally rational for us to be indignant that one of our own was treated so poorly in a “civilized” white country for attempting to speak at a conference. Greg Johnson should not have had to deal with this treatment because he is one of us, because he is better than those who had him arrested, and better than any dirty rat who celebrated his arrest. We want him out and able to speak wherever he pleases, because the idea that this system – this putrid, capitalist, soul-crushing system – has any power over any of us makes our skin crawl. It is natural, healthy, and moral for us to feel this way.

One need not search the dusty shelves of libraries for old history books to understand that the story of humanity is one of power dynamics. One need only look around. Our enemies use their power against us daily, and have for many decades. The tactics change and the intensity shifts, but the war against white political solidarity rages on. They seek to prevent us from speaking, from making collective demands, from publishing books, from propagandizing online, from marching, from holding private conferences, from finding employment, from forming communities, and from taking any steps at all to either change or exit the anti-white system. This is why they need to preserve their power and why need to take it from them and make sure they never get it back. We are not concerned that Norway is doing something now that we plan on doing later. It doesn’t concern us in the slightest. We are not childish, weak-willed conservatives.

Up until recently, the colonizers thought that they would possess their power forever, but they are no longer quite as certain. (To any who might be reading this: Those nagging doubts are coming from the tiny smart part of your brain, struggling mightily to send sensible signals through the fat, blackened, evil parts; best to keep a metaphorical bag packed.) There is an electric hum in the white street; a restlessness, a growing indignation, a recognition that the game has been rigged for some time, and that the old rules no longer make sense in this global bazaar. We want the power to control our own future again – and we will get it. They will try and try, but they cannot arrest dissent; only the odd physical body here and there, and that just won’t cut it. They are fools and crooks to a man, clinging desperately to their fading power while ironically acknowledging the seriousness of the White Nationalist idea to the world, and thus the inevitability of their collapse.