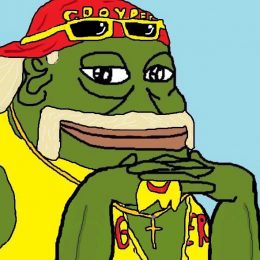 The ongoing conflict between Conservative Inc. and the America First wing of the Right has escalated. Whereas previously Conservative Inc. has been getting it good and hard from the intrepid groypers, this recent engagement at North Carolina State University [2] has seen Conservative Inc. improvising and adapting to, if not quite overcoming, the amphibian opposition. Charlie Kirk, who’d managed to get himself quite a reputation as a punching bag for green-fisted questioners, actually fought back. Several online pundits – even so-called Groyper Generals such as Nick Fuentes – have declared the event a defeat, and they are in a sense right. In another sense, the North Carolina event, if less than perfect, cannot be quite painted as a defeat. This is for several simple, yet counterintuitive reasons which will be the subject of this analysis.

First, let’s get the obvious out of the way. There were at least several false-flag plants among the audience whose mission was to associate the America First patriots with neo-Nazism, stupidity, and defunct organizations, chief among them the fuckhead who rushed to the microphone when Charlie Kirk shoehorned Identity Evropa into the discussion. However much Conservative Inc. is paying him, it ain’t enough. This hurt the optics of the questioners something fierce. Secondly, the venue was smaller, which allowed Turning Point USA (TPUSA) to limit the amount of people who were present, and you can bet your bottom dollar that they screened against young, white men with alpha physiognomy, given that this is your model groyper [3]. Thirdly, much of the low-hanging fruit with regard to tough questions had already been picked in previous events, so unless groypers want to repeat questions, they have to improvise and invent ever new ones. This is tough under the best of circumstances – and the circumstances weren’t even good.

Moving on, we observe in this event not just the usual passive-aggressive venue manipulation, line-jumping by TPUSA plants, and evasiveness by cuckservatives, but outright hostility and deception by Charlie Kirk. The first questioner’s question was derailed by a hostile Kirk forcing him to either endorse or denounce Identity Evropa, which he holds is “a neo-Nazi organization which intended to overthrow the government.” This was despite the fact that Identity Evropa (consistently mispronounced “Yevropa” by Chuckie Boy) being a defunct organization which was none of these things even when it existed. This led to the aforementioned TPUSA plant volunteering to defend this strawman of Identity Yevropa and wresting the microphone from the genuine groyper. For those interested in how Charlie managed to force this issue, this video by Steve Franssen [4] should provide valuable insights. Overall, Charlie was biting back, answering questions with questions, and hectoring in a hostile tone. We are once again reminded of the long-term damage wrought to our movement by short-sighted people, like the ones who delivered this rhetorical weapon into Charlie Kirk’s hands. Any future nationalist movement will have to burn off this deadwood, whether it comes from White Nationalism 1.0 or the failures of the Alt Right period.

Here we arrive at the first way in which this defeat has traces of victory in it. Charlie Kirk and the rest of Cuckservative Inc. like to present themselves as rational, even-minded, and fair people, in contrast to the insane, mercurial, and bullying Left. Charlie might have beaten back the groyper question onslaught this time, but he did it by acting like a bully swinging at Yevropian phantoms. There is fault in the groypers, too, for preparing to deal with tame and gelded Charlie and not Ghostbuster Charlie, but the fact that Conservative Inc. has been forced to put on its war face is a minor victory in itself – especially since that war face is not quite warlike, but rather, bitchy and bullying. Schoolyard, not battleground. He sounds very much like a beta who first reads about negging women in order to get laid and then goes to the nearest woman and calls her a dirty whore in a shrill voice. This is in keeping with the conception that Conservative Inc. is staffed by low-energy, low-testosterone cucks. The war face and war tone are not a good fit for Chuckie Boy, and while this sudden change of tactics may have caught the groypers off-guard, in the long run, he cannot pull it off convincingly.

But even if Charlie and Co.’s newfound hostility does turn out to be an effective groyper repellent, it ultimately costs them more than it costs us. I will now draw an analogy with a military conflict, so to any and all disingenuous and dishonest journalists, Leftists, cuckservatives, federal agents, wignats, and other species of pond scum: THIS IS NOT AN ENDORSEMENT OF OR INCITEMENT TO ILLEGAL ACTION.

During the Troubles in Northern Ireland, one of the greatest IRA victories came without much fanfare and did not lead to jaunty folk rock tunes [5] about single-handedly taking out a column of British armored vehicles. By placing IEDs on the roads, the IRA forced the British Army to travel around Northern Ireland in helicopters, burning expensive helicopter fuel rather than comparatively cheaper gasoline, just to avoid casualties. This greatly escalated the price of the conflict for the British government, increasing the pressure to come to an accord with the IRA, and ultimately leading to the Good Friday Agreement which ended the conflict in the IRA’s favor. Now that the analogy has been made, the author disavows terrorist organizations, the construction and deployment of IEDs, and composing jaunty folk rock songs about liquidating members of the Royal Ulster Constabulary with an assault rifle.

The measures that Charlie Kirk has taken to eke out this stalemate masquerading as a victory against the groypers run contrary to the nature of both TPUSA and the broader cuckservative establishment. Their self-cultivated image of the open-minded, rational, and fair alternative to the nutcases and bullies of the Left falls apart if they point and sputter at defunct organizations in tones which are equal parts schoolyard bully and annoying yenta. So much for the rational Right.

Doesn’t sound like much? No, it doesn’t. But it is. If you force a boxer to fight like a wrestler, pretty soon he’s going to make a catastrophic mistake, even if the sudden change of stance throws you off your game on your first encounter. Similarly, in chess, the chaotic and improvisational style of amateurs can throw even grandmasters off balance, but the grandmaster will always recover from the initial shock and deliver a brilliant victory in the next game. Chuckie Boy’s mask of toughness does not become him.

Understanding these hidden victories is the key to understanding Fourth Generation Warfare. I warmly recommend that everyone reading this read the Fourth Generation Warfare Handbook by William S. Lind. In this sense, the groypers are a fourth generation political force, and victory doesn’t come in the shape of your classical rout, but rather in forcing the enemy to systematically play against type. This has been achieved in North Carolina. Now we look to the next encounter, in Texas, in order to observe the behavior of our enemy.

However, we’d be remiss if we did not look at ourselves and see that there is room for improvement. A new and improved fourth generation groyper may be necessary for the upcoming slog with Conservative Inc.’s machinery of evil. Steve Franssen urges groypers to familiarize themselves with Kirk’s trickery in the video linked above. Nick Fuentes has some advice and criticism of his own for the groypers [6]. I generally agree with both of those takes, but with a caveat: Do not think of them as scripts. The classic mistake of betas trying to “learn game” is to think of it as a script to be implemented – and so you get the bitchiness demonstrated by Charlie Kirk.

Far better, in my humble opinion as a former actor, director, insurance salesman, and current attorney, is to actively transform yourself into a person capable of not only implementing what the groyper generals prescribe, but also thinking on your feet – and maybe a little bit of generalship yourself. This is a difficult and arduous task which will take a long time, but successfully completing it might just be the smartest thing you ever do – not just for the groyper wars, but for your entire life.

The key to becoming the kind of guy who can defend himself from Charlie Kirk’s attempts to reframe the discussion and even actively dominate Charlie Kirk is confidence. Confidence in yourself is, in my experience, the absence of fear (or more precisely, its conquest by courage). I heard a lot of shaky voices from groypers in the North Carolina video. Maybe the lack of fellow groypers in the audience (a situation purposefully engineered by TPUSA) discouraged them, but my instincts as a penniless hipster director who had to work with amateur actors tells me that they had a bad case of stage fright.

Stage fright can be fought in two ways. The first is rehearsing, which you ought to be doing anyway, and since we’ve now seen what Chuckie and probably other cuckservative puppets will do, you should rehearse with a friend who will play the role of Charlie Kirk. Make sure that your friend doesn’t play a caricature of whomever you’re questioning, and that he is presenting not a strawman but a steelman. You will have to outwit Charlie Kirk and fight off his reframes.

The second way is increasing your adrenaline tolerance. Experienced actors do not get stage fright because their systems handle adrenaline differently. Most of you reading this will probably not go out seeking glory on the boards of a theater, so the most practical way to flood your system with adrenaline is to practice martial arts, and specifically, open sparring [7], which you should be doing anyway. Nothing else in the civilian world compares. Once you’ve faced the oncoming fist of another man, Chuckie’s loaded questions will slide off you like crimes off a Clinton.

Take this with a big caveat: Not all of us are cut out for verbal swordplay, even against someone as hapless as Charlie Kirk, not to mention a motormouth like Ben Shapiro. And even if you are, you might not have the improvisational skills necessary to head off all attempts at reframing the conversation. Research your question, head off possible rabbit holes the enemy might want to lead you down, and keep your eyes on the ball. Train your body and mind to withstand the terror of scrutiny and attention, especially hostile attention. Do everything in your power to boost confidence. Tailoring and grooming become important not just due to optics, but also to give you that spring in your step, the hallmark of the well-dressed Chad. And if you feel you’re not up for it, step out of line. Live to fight another day.

The Groyper Wars have gone beyond the initial bombast. Conservative Inc. has cycled between gatekeeping tactics, from ignoring, mockery, indignation, and censorship, and seems to have stumbled upon a combination of bullying, manipulation, and reframing as a halfway successful counter to groyper questions. They are, however, playing against type, and cannot act as tough guys for much longer. It is now up to the groypers to adapt to this development. Above all, we have to watch the behavior of the beast and other actors – chief among them, President Trump. The battlefield is always changing, always shifting, and the rules of engagement and tactics are in flux. Vigilance, courage, and mastery of self will win the day.

What, you thought it would be easy? You’re better than that, anon.