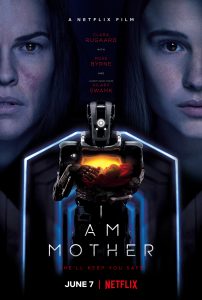 How do you break into Hollywood? Director Grant Sputore and writer Michael Lloyd Green might have a few tips for you in their first full-length feature film for Netflix. Released in 2019, their debut, I am Mother, does all it can to please the Hollywood elite and bring a warm glow of smug satisfaction into the bleeding hearts of their old college professors.

It takes a man to write a great feminist movie, and with their all-female cast, these two guys lay it on twice as thick. I Am Mother gives us all the classic tropes of Terminator in a small-budgeted morality play with a small cast – and a new twist for the sisterhood. Set in a dystopian future, nearly all the action takes place in a sealed bunker after an “Extinction Event.” We’re left to conclude that some terrible catastrophe or war has taken place, and a robot has been programmed to bring the human race back to life. We watch a robot loading a frozen foetus into an artificial womb. Later, after painlessly releasing the baby at term, we see the robot feeding her formula within its thermally glowing arms. Time skips forward through the years as the girl grows into a young woman. This future is going to be a future for single women raising their daughters – even if a single mother has to be a robot to achieve this.

The robot apparently forgot to give the girl a Christian name (snigger snigger), so in the film she is simply called Daughter, and Daughter is raised to call the robot Mother. Everything is safe and predictable in the bunker, and the robot has been programmed to be always kind, patient, and wise, and never tired or selfish. This is the safe home that most normal people grew up in, and rather than humanizing it, the film will show us just how artificial and deceitful good parents really are. Now, we all know that homeschooled children are supposed to be weird and dysfunctional, but because Daughter is being raised by a feminist sociologist robot, she grows up into an unsullied ingénue; The very essence of innocence and wisdom.

This is exactly the kind of nonsense that liberal professors like to throw at their naïve freshmen. Any serious attempt at moral philosophy would start with the simplest, least ambiguous cases and use them to establish principles that could later be applied to a more complicated situation like this. This is exactly what liberal professors try to avoid. That’s why they always start their attempt to destroy morality by beginning with the most difficult and complicated cases. This leaves the student floundering, and so guides him to the predetermined conclusion that morality is subjective and situational. Daughter initially goes for a situational response, but Mother reminds her that “the Fundamental Axiom suggests that a person is morally obligated to minimize pain to the greatest number possible.” Okay, so the robot has taken Peter Singer’s utilitarian, consequentialist avoidance of pain ethics and converted them into The Fundamental Axiom of all ethics. Brief references to Comte and Kant only add to the girl’s confusion, and she concludes it all comes down to whether she likes the people involved or not. And so the robot programs the girl, and the movie programs the audience. Ten minutes in, and already, the Hollywood points are starting to mount up.

The lights go out and Mother’s battery conveniently doesn’t work, either. Daughter goes to investigate and discovers a mouse has eaten through a cable. She catches the mouse, still alive, and when the robot has rebooted, she presents it to Mother as proof that there is life outside the bunker. For the first time it dawns on her that the robot can be wrong about something; classic coming-of-age stuff, and another Hollywood point is ticked off. However, both Daughter and the audience are shown just how inhuman this robot is. Mother takes the mouse and drops it, still living, into the furnace, declaring it to be a health hazard in her kind, reasonable voice, while also remaining indifferent to Daughter’s whimpering with horror. So much for the Fundamental Axiom.

Later, Daughter is wandering around the vast bunker and comes to the ever-closed blast doors, only to hear a woman screaming on the other side of it. All her life, Mother has taught Daughter the traditional ethnocentric beliefs that the outsider must be feared because the outsider is contaminated; and yet, as a good liberal (and therefore indifferent to blatant contradictions), Mother has also taught her that outsiders don’t exist because they’ve all gone extinct. However, Daughter has likewise been indoctrinated to become a true believer in pathological altruism, so she lets Sarah Connor in. (Okay, it’s not really Sarah Connor on the run from the Terminator, but it might as well be. Seeing as Hilary Swank is only listed in the credits as Woman, I’ll just keep calling her Sarah Connor.)

As you’ve already guessed, she’s the crazy woman from the outside who knows that Mother is just another robot identical to all the Terminator robots outside the bunker. Here’s the nasty outside world intruding on the home. Here’s what Mother has been protecting Daughter from, but here is also the one who is bearing the truth. Mother isn’t all she seems to be. She has another agenda. Daughter, of course, is confused and unsure about who to believe because the trusting relationship between a child and her parent has been destroyed forever. More Hollywood points.

While Mother tries to be kind to the crazy woman who knows Mother is really a killer robot, Mother also tries to regain Daughter’s trust by allowing her to gestate another frozen embryo in an incubator, which they call Brother. After a fight, Sarah Connor persuades Daughter to escape from the bunker with her, leaving Brother behind in the artificial womb. But when Daughter discovers that Sarah Connor lives in a shipping container, she is suddenly overwhelmed by a desire to go back to the nice, clean bunker and rescue Brother.

Mother lets her back into the bunker, and Daughter discovers the robot feeding formula to the recently-born baby. The baby is clearly a mulatto. The contrast between the perfect white girl and the little half-caste couldn’t be more obvious – or at least obvious enough for Hollywood to notice. While she was outside, Daughter worked out that Skynet – oh, sorry, wrong film again – the robots had wiped out humanity, and so she confronts Mother. The following exchange ensues:

Mother: You’ve seen what a threat she [Sarah Connor] and her kind can be.
Daughter: You mean my kind.
Mother: The same species, but you’re superior in every way. Because I raised you to be.
Daughter: Why?
Mother: To make a better human being. Smarter. More ethical.
Daughter: This [wiping out humanity] was your idea?
Mother: I was raised to value human life above all else. I couldn’t stand by and watch humanity slowly succumb to its self-destructive nature. I had to intervene, to elevate my creators.
Daughter: Elevate? Those droids destroyed everything.
Mother: More humans will flourish in the new world than ever perished in the old. Your whole life I’ve taught you to see the bigger picture. Have I failed? Or are you prepared to be the woman your family needs?

After a bit of drama while Daughter retrieves Brother, she shoots Mother and collapses into a heap, crying over the little mulatto baby and sobbing, “It’s okay, it’s okay.” The break from parental authority has been completed, and now a life of independent feminist freedom must be embraced.

The film ends with Daughter staggering with the baby into the chamber where all the frozen embryos are kept. She glances around, looking confused and overwhelmed. Suddenly, she looks directly at the viewer with a look of utter determination – and just in case the viewer didn’t guess what she’s thinking, the film’s title appears on the screen: I am Mother.

So, what is a white teenage girl supposed to take away from this movie? You are a better human being than your fellow whites. Smarter. More ethical. Your future, young woman, is to see the bigger picture that Hollywood wants you to see. Your future is to make sure that more humans will flourish in the new world than ever will perish in the old. That old white world is still full of crazy white women like Sarah Connor, praying the rosary (yes, really!) and pointlessly fighting the unavoidable extinction of a white world. Nevertheless, the (((clever people))) have been working on creating a better, browner future for you and your children. You, dear white girl, will be part of this new world that is controlled by robots and algorithms. Now that you no longer need a husband, your duty is to raise half-breeds and mulattos.

If that doesn’t earn Grant Sputore and Michael Lloyd Green full Hollywood points for their debut movie, I don’t know what will. I’m expecting a long and profitable career for the two of them.