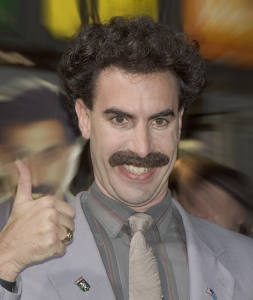 I am old enough to remember a time where you could get instant laughs by saying jagshemash. It was a mythical era known as the mid-2000s. Life was simpler and slower, but it was richer than our hyper-digitized era. It was the last quarter of the Bush era; the defining political issue of the day was America’s foreign adventurism and imperialism. Tensions between Europeans and Americans were high, and the “dumb American” meme was a source of great amusement to us dirty eurotrash. I was a spry young man at the time, with a windswept mop of hair, my body was lithe and unbuilt, and my head was full of hopes, dreams, and immature dick jokes. I’d just made it into a prestigious private school, I was biking every morning by the river, hiking with my dad on weekends, and dating a girl with tits bigger than my head. I even had a MySpace page! And you know which merry tune greeted every visitor? “Throw the Jew Down the Well! [2]” It was 2006. It was The Year of Borat.

Thirteen years later, much is different. Life is fast and getting faster while all the while feeling empty. Saying jagshemash results in zero laughs; everyone is jaded. It is the second half of the Trump presidency, and now the defining political issue is non-white immigration into the West and how the world will develop in the wake of the collapse of the American Empire. Tensions between Europeans and Americans are nothing but a dead horse meme brought up by civic nationalists who wish to rhetorically ingroup Amerindian invaders while outgrouping white Europeans, and the dumb American meme is now the preserve of Leftoid Europeans bellyaching about Trump. I am a crotchety and aging millennial, with a self-cut undercut [3]; my body is a hearty mix of muscle and . . . heh, insulating material; and my head is full of sanity-preserving copes, nightmares, and immature dick jokes. I’ve got a tenuous grip on a sinecure, I write for Counter-Currents, I lift weights and practice martial arts, and I hike with my wife on weekends. Her tits are only slightly bigger than my clenched fist. I have a Facebook page where I post photos of puppies and horses. There are no merry tunes, though; MySpace was so much more fun. 2019 is the Year of Sacha Baron Cohen calling for mass censorship online in a keynote address at an ADL summit [4].

Reading through Borat’s denunciation of the evil, far-Right tech oligarchy (that’s not a misprint) feels like reading through an imam’s injunction against eating pork: It’s the screed of a religion so alien that I can’t even summarize it properly. Apparently, he wants “hate” and “fake news” to be purged and for there to be real-time control of social media posts; i.e., for busybodies at Facebook and Twitter to approve your updates before allowing them to appear on your own timeline. He also said something about limiting reach in publishing. Of course, he’s a tactical libertarian harping on about how the far-Right tech oligarchy is private, and therefore not bound by free speech laws –  but also how the government has to impose standards on them to combat this far-Right, free speech, absolutist ideology that has taken hold of the tech giants.

Cohen describes the Silicon Six, Mark Zuckerberg, Sundar Pichai, Larry Page, Sergey Brin, Susan Wojcicki, and Jack Dorsey as being “all Americans.” That’s funny, as I notice a different pattern, but being European, I could be forgiven for not knowing that “Sundar” is a name as American as apple pie, to say nothing of the, ahem, three non-eaters of shellfish. See, what Borat would have you believe is that Facebook is a cesspit of fascism, holocaust denial, racist blood libel, and fake news. He also parrots, like any good insider, the bullshit about Russia hacking the 2016 elections by purchasing ads on Facebook. The reality, however, is that Right-wing and racialist thought is mercilessly stamped out on all of these social networks – just ask our esteemed editor Greg Johnson [5]. You have to wonder if this is chutzpah or self-delusion. At some point, I think that they’re indistinguishable from one another.

This is more than simply an expression of ethnic self-interest. The very idea of the man who made millions singing about throwing Jews down a well (“So my country can be free!”) now seeking to deny others the right to say similar, yet far less inflammatory, things is downright evil. He’ll have you thrown in Internet Jail for questioning the official narrative on 9/11, but in 2006, he used “the Jewish attacks on the WTC” as a pretext for Borat and his producers to travel the USA in a shitty van. In a nifty side effect of dissident censorship, comedians of Sacha Baron Cohen’s generation have “pulled the ladder up behind them,” in the words of Royce Lopez and Mersh of Revenge of the Cis [6] – two fat fucks in beards who you should watch and support, especially given their recent censoring by YouTube for making fun of Andrew Klavan’s insane proposal to give the entire Middle East to Israel, of all things. I’d provide a link to the video, but remember that censorship I mentioned. Yeah, it’s very tiresome.

Cohen is adamant that his comedy exposes racism and bigotry. One of his main claims to fame is that he got the patrons of an Arizona bar to sing along to “Throw the Jew Down the Well.” As one of his fellow Hebrews pointed out [7]:

In Borat, we see the recycling of one of the most basic stereotypes in the Jewish imagination: the viscerally antisemitic Slavic peasant (Borat frequently speaks about plowing in the old country).

Borat is not just a character. He is an apparition of Jewish neuroses. The opening scene of the Borat movie [8] is a concentrated dose of goyishe kop stereotypes. It has everything that the Jewish consciousness regards gentiles to be: the unrestrained sexuality, the casual and musical conduct, the merriment even in poverty, Borat’s fat and argumentative wife, the petty bourgeois one-upmanship between Borat and his neighbor Nursultan Tulyakbay (he pain in my assholes). Even the kindergarten with the Kalashnikovs is basically a nursery of Jewish nightmares about the violence-prone goyim, barely restrained by a combination of repression and deception.

Kazakhstan is a Central Asian country, and Kazakhs are Central Asians, but the village where the scene was filmed is in Romania. Romanians aren’t Slavs, but are close enough. The movie uses music from a variety of sources, and not one of them is Slavic. In fact, Sacha Baron Cohen got into a bit of trouble when he used “Caje Sukarije,” originally by Esma Redjepova, a Macedonian gypsy singer, without permission. This led to a lawsuit. For a while, we were swimming in “Jew gyps gypsy, gypsy jews back”-type jokes (those were good times, I tell you). If I were the cynical type, I’d conclude that Sacha had collapsed the entirety of the East into a single Balkano-Turko-Slavo-Central Asian category of “non-denatured goyim.” There has been no clearer insight into the Jewish psyche since Seinfeld.

Sacha Baron Cohen’s claim that he’s unearthing bigotry by dressing up as Borat Sagdiyev is ludicrous. It belongs in the “FBI foils FBI terror plot” category of bullshit. Borat will harp on about how the Jews did 9/11 and how they transform into cockroaches after dark – and when you agree (mostly just to get the ranting foreigner out of your face), he goes “Aha! Found the anti-Semite! (Oy vey!)” His act also serves the vital purpose of exaggerating reasonable and empirical inquiries so that they become ridiculously outsized caricatures in an attempt to mute discussion of Jewish influence, the Jewish tendency for deception and self-deception, and other questions regarding the behavior of the Jewish people – both as individuals and collectively.

If, for example, we ask about possible Israeli involvement in 9/11, we are automatically derided as believers in a spergy conspiracy theory having to do with jet fuel and steel beams- because why the hell not? In reality, a sizeable portion of the population is ready to believe that the Bush clan was either involved or at least allowed 9/11 to happen, especially given that the attacks happened right after Rumsfeld discovered about $2.3 trillion missing from the Pentagon’s budget; and Saudi involvement in is a matter of public record. It is not a great stretch of the imagination to inquire whether a group known to be allied to both the Bushes, the military-industrial complex, and the Saudis might have had something to do with the attacks, especially given their wicked dance moves quite outside the disco.

Cohen made his millions poking fun at the goyim. He achieved world fame as the most offensive stereotype of an Eastern European one can imagine. He deceived people in order to put them on the spot and make fun of them, sometimes ruining their lives. Now he wants the government and tech giants to clamp down on “offensive” speech, making fun of people and “fake news.” He still wants to ruin people’s lives, though, as long as those people are gentiles not quite on board with the brave new world he wants to live in. The odious crybullies at the ADL have drafted a short list of people they want censored [9], notable among them Jewish critics of Israel such as Gilad Aztmon and Israel Shamir, academics like Kevin MacDonald, and so-called Groyper generals such as Vincent James and E. Michael Jones. Revenge of the Cis, which I mentioned before. Nobody is going to be allowed to make fun of Jews, and nobody will be allowed to propose unsanctioned ideas about the Israel-American relationship; it’s all fake news. As YouTuber RamZPaul is fond of pointing out, in the year 2019, White Nationalism is a crime, while Jewish nationalism is mandatory.

It almost makes a fella believe that Jews are horribly persecuted and would be holocausted in this terrible world of far-Right tech oligarchs and the fascist Drumpf government, if not for the watchful eyes of the ADL . . .