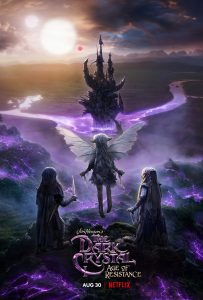 The Dark Crystal: Age of Resistance is an incredible artistic achievement and one of the most ambitious puppet productions ever made. A prequel to Jim Henson’s The Dark Crystal (1982) consisting of ten hour-long episodes, the show is faithful to the spirit of its predecessor and explores the universe of Thra in breathtaking detail. Its debt to European folklore and its message of uniting against a common foe will resonate with ethnonationalists.

The show takes place in Thra, home to a race of fair elven creatures called Gelfling. There are seven tribes of Gelfling, each with distinctive strengths. The Gelfling produced an advanced civilization, exemplified by their architectural feats and complex writing system. Temperamentally, they are loyal, honest, and fair-minded. It’s hard not to see them as kin to Europeans. They also possess the ability to share memories with each other via physical contact (“dreamfasting”) and to transform thoughts into physical objects (“dreametching”). When they die, their essence returns to Thra, their ancestral homeland and the land of their birth.

The most prized object in Thra is the Crystal of Truth, whose essence is one with Thra and the Gelfling. A dark age dawns when the Crystal is corrupted at the hands of the Skesis, an alien race of hideous reptilian creatures with large beaks and fangs. They are terrified of death, unlike the Gelfling, and transfer the life-force of the Crystal to their own bodies in the hopes of obtaining eternal life.

When the Skesis find that they have exhausted the Crystal’s abilities to rejuvenate them, they turn to a new method: extracting vitality from Gelfling by exposing them to beams of light emanating from the Dark Crystal. The first Gelfling to be drained in such a manner is a fair-haired Castle Guard called Mira, who was exploring the catacombs of the Castle of the Crystal and happened to be in the wrong place at the wrong time. Her lover, a Castle Guard called Rian, was caught witnessing the procedure but managed to snatch the vial containing Mira’s essence and escape by the skin of his teeth.

Like a parasite’s exploitation of its host, the Skesis’ vampirism threatens to sow the seeds of their own destruction since their actions, if left unchecked, will destroy Thra itself. The corruption of the Crystal disrupts the balance of Thra and brings about the Darkening, a malign force that infects Thra and causes a blight throughout the land, but the Skesis are indifferent to this because their avarice blinds them to long-term considerations.

The Skesis hide their misdeeds from the Gelfling and brainwash them into believing that they are superior beings and honorable protectors of the Crystal. The Gelfling obsequiously obey their orders and grant them gifts. The Skesis accuse Rian of having murdered Mira, and he instantly becomes a pariah, shunned even by his family. The Gelfling are told that Rian has a mental sickness and would infect them if they tried to dreamfast with him, recalling Soviet psychiatrists’ attempts to pathologize dissent by diagnosing political dissidents with schizophrenia.

A metaphor for the herd mentality of the brainwashed Gelfling emerges in a later episode when the Skesis mobilize a group of spiders collectively termed the “Ascendancy” to control the Gelflings’ minds by affixing themselves to their eyes. The affected Gelfling form a hive mind and speak in unison, in a robotic voice.

The closest equivalent to Rian’s experience today is that of outspoken White Nationalists, who have faced persecution even from their own people and, in many cases, have been denounced by their own families.

With the exception of his trusty friend Gurgeon, Rian does not find a sympathetic ear until the fourth episode, when he encounters some Gelfling who have been chasing him in a Podling village. After a tense exchange, he displays the vial, and one of them agrees to dreamfast with him: “The Skesis may rule the land, but they do not rule my heart.” The rest follow suit and are later joined by Rian’s father. Rian and his father are reconciled, and they all vow to fight together. It is one of the most moving scenes in the whole show. No matter how brainwashed our people are, they still have an innate partiality toward us that cannot be eradicated.

The concept of dreamfasting comes from the 1982 film. Jen and Kira dreamfast upon meeting; their voices blur together as the two telepathically exchange childhood memories and achieve a kind of psychic oneness. In Age of Resistance, the act becomes a symbol of Gelfling unity and solidarity.

The theme of unity over division is prominent throughout the show, which could plausibly be interpreted as an allegory for the importance of racial unity. Rian crosses paths with Deet, a humble girl hailing from the Caves of Grot, and Brea, a Vapran princess and daughter of the All-Maudra (the leader of the seven clans), and the three set off to find a sword prophesied to defeat the Skesis, accompanied by a Podling called Hup, a dwarf-like creature who looks like a potato. They each hail from different clans – Stonewood, Grottan, Vapra – but are united in their quest.

As news spreads of the Skesis’ crimes, more and more Gelfling join the Resistance. The All-Maudra is not initially convinced, but sees the light when she and Brea enter the “dream space” and encounter Mother Aughra, an oracle who is the embodiment of Thra. Brea’s sister, Princess Seladon, however, remains stubbornly loyal to the Skesis. The Skesis general thus murders the All-Maudra, allowing Seladon to become the new leader of the Gelfling.

Seladon is a good example of the sort of white people who ingratiate themselves with Jews and non-whites. Lacking Brea’s intelligence or her sister Tavra’s grace, she feels inadequate and unloved. She craves her mother’s approval, but the All-Maudra rarely praises her. But the Skesis reward Seladon for serving them and betraying her people. Her treason gives her a sense of power that she would not otherwise have. She goes as far as to spite her own mother by burning her and refusing to adhere to Gelfling burial rites. She winces when a Skesis eats the sigil of the Vapra clan, but says nothing.

The portrayal of Seladon is psychologically astute. People generally betray their own not out of love for the enemy (unless there truly is something wrong with them), but out of love for their own gone awry. Seladon allies with the Skesis out of resentment and wounded pride. Her bitterness causes her to retaliate not just against her mother, but against all Gelfling.

It takes a brush with death to convince Seladon to join the Resistance. She attempts to compromise with the Skesis, but they do not want compromise. They want to drain the essence of every last Gelfling, even Seladon herself. They come close to draining her, but are stopped by Mother Aughra, who trades her own life for the lives of the Gelfling about to be drained. Seladon is forced to confront the fact that, at the end of the day, her loyalty to the Skesis makes no difference. They see her as simply a Gelfling, and therefore an enemy.

The Skesis frequently quarrel among themselves. The Emperor and General are aggressive in their dealings with Gelfling, while the Chamberlain (voiced brilliantly by Simon Pegg) is a more slippery character who tries to trick them into believing that he has their best interests at heart. But despite their differences in opinion, they all support their own interests and want to drain Gelfling, much like how both liberal and neoconservative Jews support whatever they think is best for Jewish interests.

Age of Resistance (and The Dark Crystal) should be viewed by all white children. It is both a visually stunning and imaginative fairy tale and a fable that can be used to illustrate the principles of White Nationalism. It is certainly dark, but so are the tales of the Brothers Grimm. Children are not as innocent as they seem.

Many prequels and sequels today are little more than third-rate knockoffs that disfigure the spirit of their predecessor and exploit fans’ affections in the name of profit. Age of Resistance does no such thing. It plumbs the depths of the universe introduced in the film without erasing its sense of wonder and mystery. (Two prequels that achieve the exact opposite: The Phantom Menace and Ridley Scott’s Prometheus.) The stylistic and spiritual continuity is remarkable. Jim Henson’s children run the company he founded and have kept his legacy alive. Brian Froud, the 1982 film’s concept artist and the illustrator of its companion volume, The World of the Dark Crystal, returned to work on the designs for the show (this time joined by his son, who played the baby boy in Labyrinth). Even the designs of the plants were preserved.

The look and overall ethos of Age of Resistance recall ‘80s dark fantasy films like Legend (1985) and The NeverEnding Story (1984). There are also echoes of Lord of the Rings (LOTR). Froud and Alan Lee (one of LOTR’s concept artists) actually collaborated with each other on a book of faerie illustrations. As in LOTR, Froud’s work is steeped in British folklore and mythology.

The show brims with strange, mythical beasts, including Nurlocs, giant worms with many limbs; Landstriders, towering quadrupeds with rabbit-like ears; and Crystal Skimmers, enormous stingray-like creatures that the Dousan clan use to travel through the desert.

The craftsmanship that went into making Age of Resistance is astounding. Virtually everything was hand-crafted. Even Brea’s tiny journal is filled with hand-drawn hieroglyphs and designs. CGI was used only in a minor capacity, such as to remove the presence of the puppeteers in certain scenes. Initially, they experimented with computer-generated Gelfling; a sample of this is shown in the documentary The Crystal Calls: The Making of The Dark Crystal: Age of Resistance. There is a huge difference between the computer-generated version and the puppet version. The puppets feel much more tactile and alive. This quality really enhances the humanity of the story and its relevance to the human world.

The puppets are capable of exhibiting an impressive breadth of emotion. Blinks and head tilts are deftly deployed to convey emotional nuance, fulfilling Jim Henson’s wish to depart from the exuberant gesticulation characteristic of the Muppets and use the Gelfling to experiment with subtler, less cartoonish movements.

The Crystal Calls is an interesting look at the challenges involved in shooting and handling puppets. Holding a heavy puppet above one’s head while manipulating its limbs and facial muscles and maneuvering a narrow space below the set is no small feat.

Puppetry is an ancient art that has long been synonymous with folklore and folk tradition. Skomorokh theatre in Russia was the art of the common people and was performed in the streets. Pulcinella is a symbol of Naples and her people, and his English equivalent, Punch, is likewise a populist icon associated with British folk culture.

Puppetry also played an important role in the Czech national revival. Under Hapsburg rule, German replaced Czech in schools, institutions, and theaters, and large numbers of Czech-language books were burned. Puppeteers continued to perform in Czech, thereby contributing to the preservation of the Czech language. Puppetry became a symbol of Czech identity and a means by which to communicate the ideals of Czech nationalism.

Puppetry has the power to captivate large audiences and strike a chord with the average person in a way that few art forms can. I propose that White Nationalist artists look into making puppet productions.

I highly recommend Age of Resistance. It is both a richly imaginative work of fantasy and a fable that can be used to illustrate the principles of White Nationalism. It hearkens back to an age in which entertainment for children was actually serious, both morally and artistically.