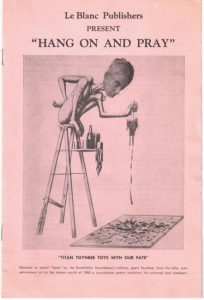 Frederick Charles Ferdinand Weiss (July 31, 1885 to March 1, 1968) was along with H. Keith Thompson, Yockey’s primary US collaborator. Yockey, Thompson and Weiss engaged in joint literary projects, with numerous pamphlets published by Weiss and written with the common designation X.Y.Z.

Weiss had migrated to the USA from Germany in 1909, acting as a financial mediator for the Northern Pacific Railway, and numerous other business ventures. He returned to Germany in 1914 to serve as an artillery officer during World War I.[1] [2] He returned to the USA in 1930, and was interned briefly in 1942. He never became a naturalized American.

After the war, already in 1946, Weiss established Le Blanc Publications and that year published a booklet, Quo Vadis America. The following year he published Germania Delenda Est?[2] [3] His influence was primarily that of Oswald Spengler, but his thinking so closely converged with that of Yockey’s that the meeting of minds goes beyond a shared commitment to Spengler, especially in regard to the antagonism both held towards the USA as “the enemy of Europe,” to the point that both were regarded by US authorities as actively pro-Soviet, and in contact with Soviet agents.[3] [4]

Weiss stated that he first heard of Yockey after receiving some of his writings from England in 1952. They met in Fall that year in New York City, and he introduced Yockey to H. Keith Thompson, Yockey assisting Thompson legally to register as a “foreign agent” for the then-burgeoning Social Reich Party.

Weiss’ New York farm, up Shawangunk Road, a private dirt road, provided a safe-house for Yockey on his visits back to the USA, despite the Anti-Defamation League of B’nai B’rith (ADL) having established “anti-Nazi journalist” Sanford (Sandy) Griffith, described in an FBI report as having a “known unsavory background,”[4] [5] in a residence down the road from Weiss.

D.T.K., publisher of TRUD, a lively Yockeyan newsletter, who knew Weiss after Yockey’s death, states of this:

The ADL had Griffith purchase a property near Weiss just to maintain surveillance! There was a great deal happening at the Weiss farm. Assorted screwballs dropped in as well as many VIP types. Of course, Yockey resided there whenever he could get to the eastern coast and gain transportation to Mt. Hope, N.Y., which still is quite rural. The ADL and the Federal police were drooling with interest over Y’s meanderings and contacts, as we all know, and spared no expense of time or dollars to pursue him.[5] [6]

D.T.K. states that when Yockey was staying at the Weiss farm “he often had to retreat to a nearby cistern under a nearby barn. A friendly police chief in the town would get wind of the FBI in the area and place a call to the Weiss home. The code phrase was: I’ve seen the Fuller Brush Man[6] [7] in town today.’ The Feds would arrive, apply pressure, scout about, and depart. At the all-clear, FPY would emerge from the cistern and breathe a sigh of relief.”[7] [8]

The Weisses were father and mother figures to Yockey. Marie Weiss nicknamed Yockey “Muggele,” “in cheery southern Bavarian dialect, referring to facial planes of a refined and distinctive type.”[8] [9] Weiss died in March 1968, D.T.K. recalling of him, “what a giant! What a brain!”[9] [10]