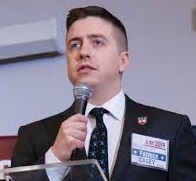 The drama never ends for the groypers.

Nick Fuentes and American Identity Movement (AIM) leader Patrick Casey are hosting a “Groyper Leadership Summit” (GLS) later this month in Florida. The event will take place close to the time of Turning Point USA’s (TPUSA) Student Activist Summit. The purpose of the GLS is to advance the Groyper War [2] and signal that there’s a serious Right-wing alternative to TPUSA.

Join us for the Groyper Leadership Summit in West Palm Beach on Friday, December 20th! Our event will overlap with TPUSA’s annual SAS conference. We invite all Groypers to join us for speeches and a celebration of our Total Victory in the Groyper Wars! pic.twitter.com/ngViWSMXjK [3]

This idea has gravely upset Bronze Age Pervert (BAP) and his coterie. He views this event – which requires attendees to be vetted, and will be held at an undisclosed location – as Charlottesville 2.0.

Totally unacceptable. I strongly recommend not to register to this (certainly not using real name/info) and for sure not to attend it. This goes against every principle of opsec that I’ve recommended for yrs, has potential to become a disaster. At the very least you will be doxed https://t.co/RNhWCs6smo [5]

BAP also insinuated that the organizers are bad actors out to ruin young men’s lives. The evidence: They’re hosting an event groypers seem excited about. The anonymous author recommends that the Right stick to online shitposting, and should try to infiltrate the “security apparatus.”

There are many issues with BAP’s reasoning. The major one is that he seems to think this is the first publicly announced Right-wing event since Charlottesville in August 2017. That ignores the multiple American Renaissance conferences, Northwest Forums, and AIM events that have occurred since then. AmRen conferences have been held for years with few problems. Nobody has been doxed at recent conferences, in spite of the antifa’s best efforts. It should also be noted that, unlike the GLS, AmRen is announced months in advance and is held in a public location – yet they experience few problems other than the usual gaggle of protesters.

Likewise, many critics are under the impression that this is some kind of public rally. In reality, the GLS is a private event at an undisclosed location. It’s been announced in advance to hit back at TPUSA and attract attendees. This does not mean that the antifa will swarm the event and the authorities will end up sending in the SWAT teams to stop it, as some critics believe.

The Dissident Right must take precautions any time it decides to host an event. Vetting is essential, and a secure location is mandatory. We can no longer risk to engage in the foolhardy experiments of 2017. The GLS appears to take this advice to heart. Every attendee has to submit to a thorough vetting process, and the location will remain secret. The organizers are taking every OpSec precaution imaginable.

BAP’s criticisms assume that the greatest risk of doxing arises from attending real-world events, and conversely that online activity poses little risk. That’s not quite true. No AmRen attendee has been doxed at recent events. Meanwhile, hundreds of identitarians have been doxed as a result of their online activity. Many of those doxes occurred as a result of leaks from Discord and other group chats. But many have also been doxed on Twitter, or due to former friends selling them out to groups like the Southern Poverty Law Center. Even a tight-knit, small online network such as BAP advocates is exposed to these risks.

There are other, more paranoid complaints. One is that the location is in a liberal area, and thus the local District Attorney will use the full power of the state to crush it. That ignores the many successful events that have occurred in liberal strongholds such as Washington, DC, New York City, and the Pacific Northwest. No SWAT teams were dispatched to those.

There’s also the concern that even applying for the event puts you on a list, and thus at risk of doxing. That’s just silly. That same concern applies to opening up a Twitter account or buying BAP’s book through Amazon. Even visiting Counter-Currents might be dangerous if the feds are tracking your Internet history. You take a risk every time you engage with Dissident Right ideas online; that shouldn’t make you a paranoiac.

Thus, it is strange that there is so much fuss over a single event. No, it’s probably not going to change the world overnight. That’s not the point. The purpose is to give the groypers a chance to network in real life and further challenge TPUSA’s claim to represent America’s Right-wing youth. You cannot build the kind of networks BAP advocates without these real-world events. If this one is too dangerous, then how safe is organizing one with a bunch of strangers from Twitter?

It is misguided to think shitposters will magically organize networks that will infiltrate local governments, much less the deep state. Many have advocated the infiltration of institutions, but nearly all who say this overlook the fact that most often the infiltrators end up changing to serve the institution, and not the other way around. A few shitlords getting jobs in the security establishment will not red-pill it; it will just demand that these people loyally serve an institution that’s hostile to the historic American nation.

Groypers should be encouraged to succeed in prestigious fields and not jeopardize it through unwise activity, but it’s unrealistic to expect that a secret, decentralized network that is too paranoid to meet in real life will somehow take over the government. Granted, secret networks have amassed real power before; the Gulenists [8] infiltrated many of Turkey’s institutions and made them serve their interests. However, they also had many public leaders (facefags, as BAP would call them) and hosted several public events. This is how they built their network, not through DM groups.

The hubbub over the GLS is unfortunate. Nick Fuentes and Pat Casey are both solid leaders and spokesmen for the Dissident Right. Fuentes attracts a large audience that no other identitarian can reach, and he is very popular among Right-leaning young people. The Groyper War is arguably the most positive development since the 2016 election and gives our guys a cause to unite around.

BAP also reaches a large audience with solid advice, and his book, while an acquired taste, is a recommended read. The mysterious BAP attracted a fair amount of media attention a few months ago and inspired several conservative intellectuals [9] to write pieces about his ideas and work.

Both sides in this debate eschew wignattery and advance the Dissident Right out of the wreckage of the Alt Right. It is an unhappy development that both sides are at loggerheads. Such is the life of the movement . . .

The most generous interpretation of BAP’s criticism is that it arose from a misunderstanding. He wants to protect the groypers from doxing, and he felt this event doesn’t adequately protect them. Like most Dissident Right spats, this misunderstanding could’ve been resolved through private conversation. That unfortunately did not happen.

Everybody wants a good life and a happy family, but even privately sharing our views jeopardizes that. Someone could overhear you discussing demographics in a restaurant and decide to turn it into a viral shaming moment. A supposed friend could report your frog Twitter account to the SPLC. A sibling could report you to the FBI [10] after an argument.

There’s a reason we call ourselves the Dissident Right. Life as a dissident is never easy, and the regime has made sure that publicizing our views comes at a cost. People should do everything possible to minimize those costs and safeguard their lives, but we should not be frightened into inaction by these risks.

Greg Johnson has offered these two rules for involvement that everyone should follow:

If you do not want to attend real-world events, that’s perfectly fine. Choose the level of involvement that’s comfortable for you, but that does not justify needless division and drama over a simple event.

To have a successful movement, we must organize in the real world. We must learn from past mistakes and avoid obvious dangers. European nationalists host many events, operate in public venues, and maintain strong institutions. American nationalists should follow suit.

The first step toward that goal is hosting events like the Groyper Leadership Summit.