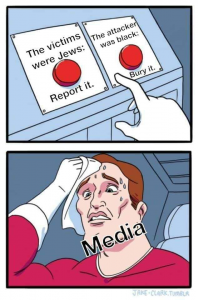 One was a black man stabbing Jews at a rabbi’s home in New York.

The other was a New York Times op-ed [2] that said Jews were genetically smarter than other people.

Both events made Left-wing Jews deny the obvious facts before them. In the case of the synagogue attack, Left-wing Jews blamed Trump, white supremacy, and the police for the black man’s violence.

In the case of the op-ed, liberal Jews said genetic studies are white supremacist pseudo-science and should not even be mentioned by the New York Times.

Left-wing Jews truly believe blacks are incapable of anti-Semitism. The same group also thinks mentioning their high average IQ poses a threat to their existence. They know these facts make it uncomfortable for them in the great POC coalition. Blacks and Hispanics resenting Jews tells them they’re different from their POC allies. Genetic studies showing their inherent intelligence provides scientific proof of it.

As America becomes less white, Jews will be faced with a nation of color that doesn’t appreciate their efforts to make it diverse. Jews will be just privileged white people to the new Americans—and Jews refuse to accept this.

The denial was in full effect after the New York attack. A black man burst [3] into a Hanukkah celebration at a rabbi’s home in Monsey, New York with a machete. He sliced five Jews before fleeing. None of the victims died in the assault.

Journalists were shocked by the attack, but were hesitant to point fingers at the obvious culprits. In recent years, non-white attacks on Jews have skyrocketed [4] in the New York area. Just a few weeks ago, two black supremacists gunned down Jews at a kosher deli in Jersey City. A week before the machete attack, multiple assaults on Jews prompted New York City to increase police patrols in Orthodox Jewish neighborhoods.

The overwhelming majority of attackers are black and Hispanic. The Monsey stabbing only played to type. Yet, many Jewish journalists are at a loss at what to say. Forward editor Batya Ungar-Sargon wrote [5]: “[T]he majority of the perpetrators of the Brooklyn attacks, and the suspects in Jersey City — who were killed in a shootout with the police — and now Monsey, were not white, leaving many at a loss about how to explain it or even talk about it.”

Ungar-Sargon says it would be easier for Jews to talk about such attacks if they came from their “traditional enemies,” which must only mean white people. The Forward writer is fine with admitting its non-whites attacking Jews, as are other Zionists. The ones who aren’t comfortable with this fact are Left-wing Jews.

Journalist Erin Biba claimed the machete attack was “complicated” and urged Jews and non-whites to “unite against white supremacy” in its aftermath. She also claimed that noting who’s attacking Jews sows “division among minority groups” and serves white supremacy.

Funny how it’s only “massively complicated” when they want to spin in favor of their protected classes.

These people are utter trash. pic.twitter.com/is1NIyUScd [6]

A day before the machete attack, activist David Klion said POC are not to be blamed for the attack and said an increased police presence would only hurt minorities.

Flooding POC neighborhoods with cops is going to carry real costs, potentially even fatal ones, for tens of thousands of people who have no complicity in these attacks. I’m also deeply uncomfortable with the optics of cops functioning as security for Jews against POC. https://t.co/WpTsaTwPR9 [8]

This response is markedly different from the Tree of Life Synagogue shooting. Then, it was okay to blame all of white America and President Trump for the shooting. Prominent commentators demanded the curtailment of the First Amendment and other extreme measures to combat white anti-Semitism. White America was portrayed as the greatest danger to Jews—no doubt about it; it wasn’t “complicated” at all.

In the case of the Monsey stabbing, an obvious group was to blame but few dared mention who.

At the same time of the stabbing, a black woman was released [10] after she assaulted three Jews on the street. She was shortly arrested again for assault. A day before the stabbing, police arrested a black man who planned to “bomb all of the Jews” in Jersey City [11].

The reason for the sudden spike in violence isn’t a mystery. Blacks always attack racial aliens who come into their neighborhoods. Whites learned this in the 1960s and ’70s. Koreans found this out in the ’80s and ’90s. Orthodox Jews have known this for a long time too. The Crown Heights riot, which witnessed blacks assault dozens of Jews, testified to this fact. Blacks don’t see Jews as fellow minorities—they see them as white outsiders preying on their community.

More Orthodox Jews are moving into black neighborhoods due to the high costs of living in whiter parts of New York. They’re pushed into cheap neighborhoods where they’re not welcome. Violence and hate are the inevitable outcomes.

On the same day as the machete attack, Left-wing Jews were furious [12] at New York Times columnist Bret Stephens. Stephens is an odious neocon and NeverTrumper. He has previously called for the deportation [13] of “deplorables” and champions increased immigration. The only thing he likes about Trump is his militant Zionism [14]. Stephens is despised by the Left for his sanctimony, neocon foreign policy, and hatred for Arabs. He once claimed a critic’s joke that he was a bed bug [15] indicated we’re heading toward genocide.

Stephens can’t resist a hot take, so he decided to write a column on why he and his fellow Jews are just so dang smart. Most of the (very bad) column says Jews are smart due to their unique culture. But he does mention a study conducted by the brave anthropologist Henry Harpending on Jewish intelligence and how it’s genetically influenced.

That citation ignited a storm of outrage against Stephens. The consensus was that the column affirmed eugenics, racism, and anti-Semitism.

Reading this Bret Stephens column, I’m reminded of the term “philo-Semitism,” which is a strain of anti-Semitism that views stereotypes of Jewish people — such as intelligence — as positive. Missing: context about how this stereotype has been weaponized to harm Jews. https://t.co/c5ktWWb4Q8 [16]

This reasoning relies on the discredited pseudoscience of eugenics — and ideology which caused 70,000 Americans to be forcibly sterilized and led to the Holocaust.

Right-winger Bret Stephens, who once wrote about the “disease of the Arab mind”, is using eugenics to explain why Ashkenazi Jews are biologically intellectually superior, without irony.

It’s not like eugenics have done any harm to Jews in the past, right?https://t.co/xTeAknpUq6 [20]

Eventually, the Times deleted the “racist” citation and issued a “correction” to the column.

Bret Stephens’ latest column (https://t.co/6ECSD0oWe8 [22]), which argues that culture and history drive Jewish achievements, has been edited to remove a reference to a paper widely disputed as advancing a racist hypothesis. We’ve added the following editors’ note to the column. pic.twitter.com/Aj7eU3Fce2 [23]

That still didn’t satisfy the outraged Leftists, who fumed over the paper of record naming the genetics.

Stephens’s point is so obvious that it shouldn’t even be controversial. Jews are more likely to have higher IQs than other races, and genetics explains why. But relying on genetics is Nazism, so that’s a big no-no. Everything comes from our environment or “culture.”

Stephens emphasized the politically correct explanations in his dumb column. However, the mere mention of genetic inheritability and the reliance on a wrong thinker like Henry Harpending was enough to warrant a correction. Will the Times now correct all such references in past articles?

It is curious that Left-wing Jews would oppose a genetic explanation for Jewish intelligence. If they don’t believe it’s natural, then they must believe Jews are overrepresented in media, finance, law, and academia due to social causes that just happen to prefer Jews. For the Left, of course, that would be racism—racism, which incites nonwhites to attack whites and serves as their “get out of jail free” card.

It would be good for Stephens’s critics to explain why Jews are so overrepresented in power and influence if it isn’t due to IQ.

This is one of the uncomfortable questions Jews have to face. Their non-white “allies” are going to ask why there are so many Jews with wealth and power, and they’re less likely than whites to be cowed by anti-Semitism accusations. No minority is going to believe Jews are their fellow oppressed minorities. Non-whites see Jews as white and privileged, no matter how many Jews supported integration and mass immigration.

A majority-minority America will be less friendly to Jews. They’ll be pushed into neighborhoods where the locals target them. They’ll be confronted about Jewish overrepresentation in media and politics. They’ll see far fewer Americans give a crap about Israel. And they’ll be excluded from the POC coalition.

European Jews recognize this sting from Muslim immigrants. Now American Jews will feel it from blacks and Hispanics. The present violence and uncomfortable questions are just a taste of what’s to come.