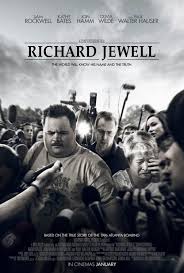 Everyone loves a good underdog story. It’s what Hollywood does well. Not to give Hollywood too much credit since I’ll posit that the underdog story is uniquely suited for cinema, regardless if it’s Hollywood or Bollywood or some independent genius shelling out the shekels behind the scenes. I suspect the reason can be boiled down to two words: “home cookin’.” With the right script and performance, filmmakers can get an audience to fall in love with a character despite his personality quirks and manifest flaws. And when this character defies the odds by taking on authority in pursuit of justice, well, the stories just write themselves, don’t they?

Legal dramas are a particularly reliable type of underdog story, and Clint Eastwood has recently added a particularly memorable one to the genre with Richard Jewell.

Based on true events, Richard Jewell tells the story of the security guard who discovered a bomb in Centennial Park during the Atlanta Olympics in 1996. Jewell, played beautifully by Paul Walter Hauser, notified the authorities who were in the process of clearing a perimeter around the bomb when it detonated, killing two people and injuring over a hundred. Without Jewell’s quick thinking, however, many more would have been killed. This turned Jewell into a hero and minor celebrity until the FBI decided to make him a suspect for planting the bomb and proceeded to ruin his life.

Jewell then reaches out to an abrasive and down-and-out attorney named Watson Bryant (played impeccably by a scruffy Sam Rockwell) and our underdog story is born. Davey, meet Goliath.

Several aspects of Richard Jewell make it stand out from other legal dramas—the most obvious being the titular character himself. He’s obese, he wears a goofy mustache, he lives with his mother, and—most importantly—he’s smart while appearing to be dumb. The audience quickly learns that, despite all appearances, Jewell is perceptive and competent. But he’s also principled and naïve and too unassuming to wear his education or intelligence on his sleeve. This makes him a prime candidate for being underestimated by his enemies.

There is an annoying stigma these days attached to grown men who live with their mothers. Yes, in many cases, such men are losers addicted to porn or drugs or video games. On the flipside however many of these men are gainfully employed bachelors who have genuine affection for their moms. Richard Jewell falls into this latter category and demonstrates quite clearly that there is nothing wrong with that. At their lowest point in the story, when the FBI had just raided their apartment and with an army of hostile media camped outside, Jewell blows up at his mother (played wonderfully by a matronly Kathy Bates) and causes her to leave the room in tears. Soon after, he apologizes, and their drawn out reconciliation is a thing to behold.

It is this stigma which initially draws the FBI to Jewell. Since he is a white, no-account weirdo with a spotty employment record and some questionable decisions from his youth, he fits the profile of the lone wolf with a hero complex—that is, a man who manufactures a crisis in order to manufacture his own heroism in solving the crisis. This is all they have on Jewell, and they cynically think it’s enough to manufacture a suspect. Jon Hamm does not simply portray the arrogant and corrupt Agent Shaw who leads this unwarranted investigation, he embodies it. I cannot remember a performance this subcutaneous in all the films I have ever seen. Hamm’s performance is so comprehensive in Richard Jewell that I am actually tempted to lose respect for him as a person. Only a true jerk and can play a jerk this well on screen. (Not entirely serious here, but you see what I mean.)

Where most legal dramas pit plucky, small-town underdogs against greedy, malignant corporations (Dark Waters being a contemporaneous example), Richard Jewell pits its plucky, small-town underdogs against the state—pitiless, self-serving leviathan that it is. It’s like a Franz Kafka novel invading your home—except that Jewell himself cannot shake the naïve belief that the state is actually the good guy. He cooperates deferentially with the FBI guys while they are so clearly trying to railroad him. He’s forthcoming with them to the point of making his case harder to defend. This leads to some genuine humor when, after an exasperated Bryant warns Jewell not to say anything, he starts chatting anyway—all in attempt to make friends with his enemies.

But thanks to screenwriter Billy Ray’s sparkling dialogue, we know Jewell’s trust is misplaced. Early on, Bryant’s expat Russian wife and secretary Nadya (played by the stunningly protean actress Nina Arianda) says, “In my country, when the state says you’re guilty, that usually means you’re innocent.” Later, Bryant lets Jewell in on a secret. Shaw and his cronies “are not the government,” he says. “They’re just three pricks who work for the government.” Big difference.

The media represents another major theme in Richard Jewell. They’re like jackals. Or maybe piranhas. Or perhaps if we created a jackal-piranha hybrid in the laboratory, and then armed this new species of monster with cameras and microphones, then maybe we can approximate Clint Eastwood’s portrayal of the press in Richard Jewell. Led by an opportunistic, bird-flipping reporter named Kathy Scruggs (played forcefully and believably by Olivia Wilde), the local media run with the flimsy rumor that Jewell had planted the bomb. On the evening of the attack, Scruggs’ only concern is not to be scooped by her competitors. Later, she trades sexual favors for leaked information from Shaw and tries to do the same with Bryant. She also runs victory laps around her office when her misleading exposé is published. Only after it is too late does she realize the enormity of her sins.

It must be mentioned that the real-life Kathy Scruggs, who died in 2001, was nothing like this. Her former colleagues at the Atlanta-Journal Constitution have staunchly defended her [2] and demanded the Eastwood print a disclaimer to this effect. I hate to say it, but Wikipedia [3] says it the best:

Leaving aside this valid complaint, the final conflict between Jewell and the FBI represents film at its absolute best. I’d call what follows a spoiler, but it really isn’t. Nothing this reviewer can write can do justice to this wonderful scene. Jewell is called in to the FBI offices to answer questions directly. After being strenuously warned by Bryant to say as little as possible, Jewell does what he always does, which is run his mouth. Only this time, he looks the beast in the eye and stares it down. Him—the overweight mama’s boy with the goofy mustache and the spotty employment record, staring down representatives of one of the most powerful organizations on the continent. It’s home cookin’ at its best. Jewell basically challenges Shaw to produce enough evidence to arrest him, and when Shaw doesn’t, Jewell declares the meeting over and walks out. If there’s a greater mic-drop moment in cinema, I’d like to hear about it.

Richard Jewell succeeds mostly through its scintillating script and superb casting. Eastwood’s direction (which I have always found lacking in vision) remains competent and admirably unobtrusive throughout. The same goes for the score. And say what you wish about Eastwood’s Lefty politics in the past, lately his films have offered a fairly staunch conservative voice in Hollywood. That the implacably corrupt villains in Richard Jewell are the deep-state government and the partisan media speaks much to the film’s Right-wing leanings. Some of Eastwood’s more subtle choices support this idea as well—such as having Jewell be a gun enthusiast who firmly disavows rumors of his homosexuality or having the camera repeatedly linger on the stars and bars appearing on the Georgia state flag. Mostly, though, Eastwood’s conservatism shines through in his choice of material. Richard Jewell is an almost entirely white film and is refreshingly—dare I say it—pro-white in outlook. The film actually drums up sympathy for white people who are pigeonholed in a negative way because of their race. You can’t get any more white bread than Richard Jewell and his mother. And you know what? That’s a good thing.

But it is good only as long we have octogenarian directors like Clint Eastwood wielding a modicum of power in a largely anti-white Hollywood. Once they’re gone and anti-white attitudes metastasize throughout the West thanks to mass immigration and demographic changes, directors of future pro-white films will find themselves to be greater underdogs than Richard Jewell himself.