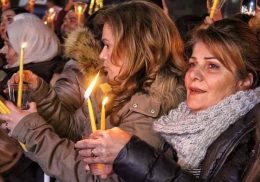 Can you feel that magic in the air? It is the most wonderful time of the year. People from all over the world retreat to their hearths and homes to celebrate Christmas, to be with their families, to enjoy warmth, to remember good times, to reflect on the year past. It is a time of good cheer, of rest after a grueling 12 months of labor, it is the time when we celebrate our Savior’s birth, and the winter solstice, when the day is the shortest and the sun is reborn. It is a time of mistletoe, of snowmen, of presents, of Christmas trees and Christmas markets. It is a time when European man, even if he has precious little to eat, spares no expense to prepare his home for that most auspicious of visitors – the spirit of Christmas. It is a time of joy. [2] Who could possibly want to ruin the season?  To ask the question is to answer it. [3]

OUR GREATEST ALLY has seen fit to bombard Syria just as that country is preparing to celebrate Christmas. According to Syrian Girl [4] and Sarah Abdallah [5] the Jewish state does this every year, to ruin the hope of the Syrian people, who gather to celebrate Christmas [6] in a truly ecumenical way. As a bonus, the Israeli missiles also seem to have violated Lebanese airspace. 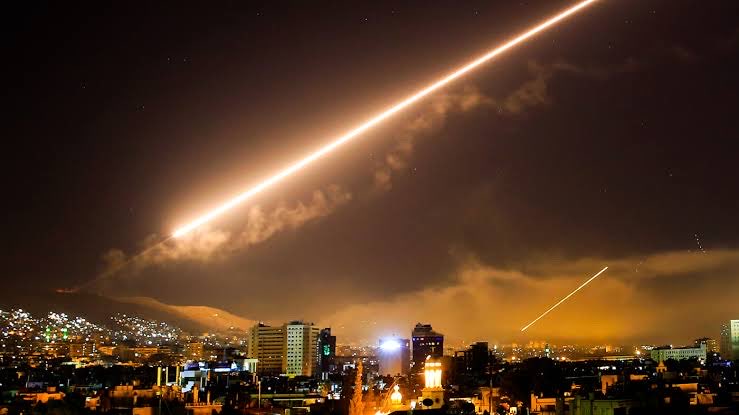 Your average conservative understands that the celebration of Christmas is under attack in the West. He will correctly point out that the Left seeks to stamp out Christmas and replace it with “holidays” such as Hanukah and Kwanzaa, or something even more repulsively homogenizing and non-denominational. He considers a wish of “happy holidays” an act of war against Christmas. But he will turn a blind eye, like a good little cuckservative, to the literal war waged upon Christians on Christmas by the state of Israel, with very real missiles striking Damascus.

In the darkest of hours of Europe, in the first year of the Great War, the spirit of Christmas descended upon the trenches. The men got out of their encampments and extended their arms in friendship to each other across No Man’s Land. The Christmas Truces were an oasis of peace and togetherness in that tortured epoch of division and war, and in that moment, European men, English, German, and French, broke bread together, sang carols, and played Christmas games. For a minute, the war was put on hold, harking back to the old European tradition of chivalry, which forbade battle on holy days, which forbade the torture and execution of war prisoners, the tradition out of which the Geneva conventions and the Peace of Westphalia arose, the tradition of European man’s attempt, futile in its last but nevertheless incomparably noble, to civilize even that most savage of human activities—war.

It is quite informative that the Jewish state of Israel would make a point of waging war on the second-holiest day of Christendom. It is even more informative that they make the point of waging their war against Syria, which is one of few countries in the Middle East where Christians can freely worship and live unmolested. Now, I am certain that the Jewish state has good strategic reasons for waging war on Syria and not, say, Saudi Arabia, but in the context of general Jewish attitudes towards Jesus and Christians, I am inclined to believe that there is a significant element of anti-Christian hatred to their choice of target and time. Christian joy on the day of our Savior’s birth itself incites Jewish resentment, these people without joy in their hearts, who narcissistically consider themselves the Chosen Ones, but whose entire religion is predicated on rejecting the messiah because his teachings weren’t quite to their taste.

Like many people who come from broken families, Christmas holds for me more bad memories than good. There is a tightness in my throat as I contemplate Christmas. A cold dread grips my heart as Christmas steadily approaches—a relic of the time when my sincerest Christmas wish was that the Christmas tree would survive the daily fights which would often culminate in violence. In my adult life, Christmas is a melancholy time, a time of mixed emotions as I am both reminded of past travails and pain, and a time when I open my heart to joy, to a truly childlike joy. If we had snow, I’d go running and dancing in the snow.

None are viler than those who ruin Christmas. To cause your fellow man pain in this time of joy is downright evil. It is a behavior that we in the Balkans associate with Albanian and Bosniak Muslim terrorists who would purposefully conduct terror attacks on Christmas, Easter, and other Christian holy days. We are under no illusion that the Muslims are our friends—why should we believe that the other ethno-religious group which wages war on Christmas is friendly to us. We do not speak of Islamo-Christian values (though the case for Islamo-Christian values is stronger), and yet our conservative luminaries are big on the Judeo-Christian values. Here’s a handy comparison: the Muslims believe that Jesus was born of a virgin, performed miracles, and they accept his ministry. What they disagree on is his divinity and his resurrection. In this sense, Islam is a Christological heresy, of a kind with Mormonism and Arianism (though much greater in scope). Judaism, on the other hand, contends that Jesus is in Hell, boiling in a vat of excrement and semen. That is not a disagreement about theology. That is a pronouncement of pure hatred.

In this magical and wonderful time, it is important to remember that no matter how powerful and well-entrenched our enemies are, they cannot triumph over us and they cannot take our joy. They tried to conquer Syria and feed her Christian population to the Salafi/Wahabi nutters. Now the spirit of Christmas is welcome in Damascus and Aleppo, as Christians fill their hearts with joy, safe in the knowledge that their Muslim neighbors will not molest them. Syria has weathered the worst of the storm. Now it is our turn. We must retake our nations and make our cities safe for the spirit of Christmas again, as they once were. We will have, for at least one miraculous night, peace on Earth and good will among men.