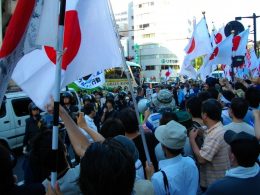 It is now approaching the end of the fall semester here in the US, and a teacher’s job becomes busy in preparation for final exams and other academic work. I definitely fall in this category at the US institution where I am temporarily employed. As a result, I missed Richard Houck’s brilliant article entitled “White Conservationism and Why Race Matters [2]” when it first appeared last month. When I finally did read it, I found the ideas it explicates brutally, somberly, and soberly truthful, as well as irresistibly compelling and galvanizing. Indeed, white civilization and all of its glorious manifestations depends on the white racial stock, which is a crucial and incontestable truth amply demonstrated by all the facts and records in spite of the vehement denial, derisive dismissal, and lurid hypocrisy of the anti-white Left. As a non-white advocate of White Nationalism, I agree with every one of the arguments in this great article, and it is exactly this overarching truth that constitutes my first and foremost reason for supporting the White Nationalist cause and thus ensuring the existential preservation, sovereignty, and prosperity of a healthy white stock.

I am fully aware that I myself, with my sincere and visceral support for and identification with White Nationalism, am a very rare exception as a non-white. As of 2018, the world’s total population was almost 7.6 billion, of which whites only account for about nine percent, which means fewer than 700 million worldwide. I estimate that among the massive and incessantly reproducing non-white population of about 6.9 billion, there are perhaps one million, if not fewer, who understand and are supportive of the White Nationalist cause in a philosophically and metaphysically grounded sense instead of for selfish, materialistic, and utilitarian purposes. And even those among that million should be judged on an individual basis before being treated as allies. But even that million (about 0.015% of the total non-white population) is a minuscule and statistically negligible number, especially given that the remainder of non-whites are invariably hostile, or at best callous, toward the white race and its racial interests.

As I am temporarily living in the US, I sometimes imagine the following scenario. What if, by chance, I encountered a white man with either pronounced or latent nationalistic sentiments here in America and gained his respect and trust after a congenial conversation during which I diffuse his pre-wired (and completely justified) bias against me, and convinced him of my sincerity as a non-white comrade of White Nationalism? At the end of our conversation, I would add the following caveat: “I am a rare exception, and you need to treat me as such. You will likely never encounter another Asian – or, for that matter, a Black, Hispanic, Arab, or any other non-white – in the future like me. At the very least, the chances are extremely slim. So perish any illusion and continue to be wary of non-whites. Do not let your guard down or allow your racial vigilance and judgment to be affected by our meeting. Judge all non-whites with an objective, yet stern and racially aware, mind and with a certain measure of prejudice, which is both right and necessary, and do not easily trust or fraternize with them unless their true nature and intentions have been proved beyond reasonable doubt.”

As for myself, I have no desire to reside permanently in America or any other white country. I leave next summer, and in the event that I come to the US again to work as a scholar and instructor, my only purpose in doing so is to aid the White Nationalist cause and to make my utmost contribution to it in my capacity as a scholar and teacher, and by leveraging all my professional advantages and abilities to educate and galvanize as many American white youths as possible to the cause of White Nationalism, as well as contributing intellectually and financially to the great world-historical mission of white revival and resurgence. This, according to Mr. Houck’s insightful observations, will also help other non-white sovereign peoples in the world, especially the one I personally care about, as I will discuss later. Furthermore, as I have previously averred, when the day comes that White Nationalism ultimately prevails and a state is established in North America, I will gladly “self-deport” and return to my own country – and which is where I rightfully belong. In the meantime, because of my contributions to the White Nationalist cause, I assume I will be granted a special non-citizen guest status by the new White Nationalist government so that I might visit for specified time periods as a friend and honorable guest. I would be immensely honored and satisfied if this were so.

It is my belief that one of the very few – if not the only – non-white peoples who has built a clean, orderly, cohesive, and productive culture and civilization, and which possesses a shared ethics, aesthetics, morality, and sensibility with the traditional West, is the Japanese. But my diagnosis of them might be surprising to many of you. While many Westerners, and White Nationalists in particular, tend to regard the Japanese as being robustly nationalistic even to this day, this is sadly no longer the case. This is in part due to Japan’s status as a defeated country subjected to heavy American political and cultural influences since the end of the Second World War. The grim truth, supported by many facts, is that today’s Japan is rapidly degrading and is heading for predictable doom and gloom no better than is the white world today.

Japan today is in the tight grip of the (((globalist plutocracy))) and its Japanese puppets and cohorts. The political, economic, and cultural elites in Japan are invariably worshippers of globalism, multiculturalism, and other Western liberal mantras. The political mainstream, as represented by the ruling center-Right Liberal Democratic Party and its leader Shinzo Abe (the longest-serving Prime Minister in Japanese history), is essentially the spitting image of the American GOP establishment and its cuckservative bigwigs, tirelessly preaching globalism, free market fundamentalism, and open borders for Japan. The rest of the major political parties are even worse, being the ideological counterparts of the American Democratic Party, hell-bent on demonizing and destroying Japan’s traditional values, its history, and its cultural icons. The mass media, popular culture, and higher education are all in the hands of the far Left, which spews ethnomasochistic, self-hating ideas non-stop. Nationalists who resist are a smeared, harried, and suppressed minority threatened with looming “hate speech” laws. The younger generations are being deliberately debauched and dumbed down by multiculturalism, moral relativism, nihilism, pacifism, and hedonism; the men are being emasculated and sissified by testosterone-killing modernism, and the women are “empowered” by man-hating, #metoo-style feminism.

In the meantime, in spite of resistance from society as a whole, the political and economic elites are plotting to relax the formerly strict immigration laws and allow a substantial increase in immigration into Japan. More and more non-Japanese immigrants are being encouraged to enter popular fields such as the professional sports and the entertainment industry, often being promoted to stardom. And, most alarming, Japan’s younger generations are being implicitly brainwashed into accepting miscegenation with racial aliens, especially blacks; there is now a new generation of interracial crossbreeds. Many of mixed blood have already become conspicuous celebrities in a high-profile fashion, and a few of them will likely be picked and groomed by the system as future political stars, just like Barack Obama in the US. In the years to come, this trend is bound to accelerate under the governance of Japan’s traitorous elites. Their purpose is to make the Japanese public inured to immigrants, opening the way for mass immigration so as to eventually irreversibly alter Japan’s demography and dispossess and displace the native population.

While these facts are perhaps unknown to White Nationalists, they do bear a striking resemblance to trends in the US and the West at large. We see a gradually emerging pattern of pathetic altruism and ethnomasochism. Although it is not yet as pronounced as it is in the white world, it is becoming increasingly visible and anchored in the Japanese national mentality, wrought by the brainwashing efforts of the Japanese elite in tandem with the Western globalist elite. A besieged minority of Japanese nationalists are holding out with grit and defiance on the battered ramparts of traditionalism with their collective back against the wall.

Given all of this, I can’t help but wonder how peculiarly similar Japanese national traits as a distinctive sub-racial stock are to those of the white European race, in terms of both their superiorities and their flaws. Perhaps the Japanese people is indeed a historically and racially obscure relative of the ancient Aryans – or perhaps “quasi-Aryan,” as Hitler once remarked. The Japanese and the whites possess similar noble characters and strengths, but at the same time they are both plagued by similar flaws and foibles. They certainly belong in the same camp and should join their efforts to overcome the same challenges.

If, on the other hand, we look at the Chinese and Koreans, given their inherent vices of deceit, duplicity, mendacity, venality, unscrupulousness, and vainglory, they likewise share similar traits with blacks, Latinos, and Arabs in the sense of being blatantly and unapologetically ethnocentric and assertive and largely immune to altruism and masochism, which make them birds of a feather.

While I shall do my utmost in my lifelong struggle to restore the righteous sovereignty and pride of the Japanese nation, it should be soberly understood that, given its current condition as a semi-vassal state of the US, Japan cannot realistically expect to achieve full independence and national restoration on its own, no matter how hard the Japanese nationalists fight. The same rationale applies to Germany, and to a lesser extent the other Western European countries as well. Only after the majority of American whites are fully awakened in support of a robust and capable nationalist movement to subdue the (((globalists))) and their cohorts will the Japanese nationalists be sufficiently empowered to launch a successful frontal assault on their then isolated and demoralized domestic enemies – and the same is true in Europe.

As a pro-Japanese nationalist, this consideration constitutes my second reason for supporting the White Nationalist cause in America with all my physical and intellectual strengths.