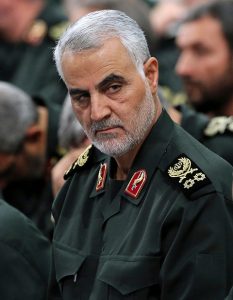 Are you tired of winning yet? And by winning, I mean the continuation of endless wars and regime changes for the protection (and potential expansion) of “our greatest ally.”

This is the first thought I had this morning when I woke up to hear about the recent US airstrike in Iraq that killed top Iranian General Qasem Soleimani. The details are still unclear, but the information so far is that these airstrikes were conducted in response to pro-Iran militants launching missiles at US-deployed troops at the Baghdad airport along with violent protests in front of the US Embassy in Baghdad earlier this week.

Right away, I immediately felt a sense of deja-vu, recalling similar US missile attacks on Syria in 2017 and 2018. Yet the whole time I was trying to get information and possible explanations for the recent airstrike, I kept thinking about all the people who attended Trump’s campaign rallies. More specifically, I thought about all the excitement and hope people had when Trump promised how his policies would be so successful, his supporters would literally be “tired of winning.” I still keep asking myself, “Is this the winning they had in mind?”

This “winning” catchphrase became the closing remark to many of Trump’s speeches during his campaign rallies of 2015 and 2016. Many Trump supporters attended these rallies despite being fully aware of the risks involved. After all, just the act of attending a Trump rally posed a threat to your safety, career, and even relationships with your friends and family. At the rallies in San Jose and Chicago, Trump supporters were physically attacked by Antifa and other protestors, all while the police stood back and merely watched.

Nevertheless, thousands of people took those risks to attend these rallies. They did so because for many of them, it was the first time in their lives that a presidential candidate openly spoke about some of the problems facing white middle-class America. Sure, Trump didn’t come out and say things so bluntly, but he was the first popular candidate to speak out against the outsourcing of manufacturing and middle-class jobs, the opioid epidemic, and illegal immigration. He also campaigned on ending the ongoing wars and conflicts in the Middle East. His solution was to focus solely on defeating ISIS in Syria (with the help of other foreign powers), which would then allow a final withdrawal of Americans troops out of Syria, Iraq, and Afghanistan. Hence, leaving the Middle East for good.

Even during the early stages of the Trump campaign, some Trump supporters were well aware of US General Wesley Clark’s admissions on how American foreign policy in the Middle East had been planned on or before the events of 9/11. For those not familiar, General Clark explained during an interview with Democracy Now that a few weeks after 9/11 (during the initial US airstrikes against the Taliban in Afghanistan), he received a memo from the Office of the Secretary of Defense. This memo detailed the plans for the US to invade seven Middle Eastern countries within the next five years. The countries listed in the memo were Iraq, Syria, Lebanon, Libya, Somalia, Sudan, and finally, Iran.

While it would take more than five years, many of the countries on the list have been either invaded, attacked, or impacted by US foreign policy. The Iraq War occurred from 2003 to 2011 (with re-engagement in 2014), replacing Saddam Hussein and his Ba’ath government with a pro-American government.

During the 2011 Libyan Civil War, US involvement included the bombings of over 100 targets and the use of one of its predator drones that would lead to the assassination of Muammar Gaddafi.

The American-led intervention in the Syrian civil war against ISIS started in late 2014 and would increase with Trump’s airstrikes in 2017 and 2018. While there has been considerable troop withdrawal throughout 2019, Trump noted in November 2019 that there would be no “end date” for US intervention in Syria any time soon.

Now we are witnessing a heated tension and potential conflict between the US and Iran. Trump has already tweeted that he isn’t planning regime change and that these recent airstrikes have been an attempt to prevent a war with Iran. I’m sure most people like me are hoping that things can somehow deescalate. Nevertheless, this seems eerily familiar to how past conflicts started with other Middle Eastern countries.

If you had asked the average Trump supporter during his campaign rallies why the US government and military had been invading various Middle Eastern countries the past two decades, you probably would have gotten one of three answers. The first and most common answer you might have heard would be “to stop radical Islamic Terrorism.” The second answer would have been “for oil.” The third answer would probably have been a combination of the first two responses.

More than likely though, you would have been hard-pressed to find many people that would identify or justify America’s foreign policy in the Middle East as being the protector of Israel. You may have heard this explanation or concern from one of the many neocon commentators on cable news channels, but most likely not at a Trump rally in Des Moines, Iowa or Tulsa, Oklahoma.

There are still many Trump supporters who would deny or mock any criticism of Israel, given that the only information they have heard on this issue are the common talking points from Fox News, explaining that Israel is “the only true democracy of the Middle East” and “our greatest ally.” The problem is that most people aren’t familiar with the historical and geopolitical rivalries that Israel has had (and continues to have) with its surrounding neighbors.

For Syria, American intervention on behalf of Israel allows Israel to expand its territory. The Golan Heights is an area between Israel and Syria. The Golan Heights was captured by Israel from Syria during The Six Day War of 1967. Israeli law was further applied to the territory in 1981. Most of the world has considered this area to be occupied Syrian territory.

Nevertheless, the US has become increasingly involved in Syria throughout this decade, starting with Obama’s “red line” speech against Syria’s “alleged” use of chemical weapons in 2012 and continuing through Trump’s airstrikes the last few years. In March 2019, the United States became the first state to recognize the Golan Heights as a territory of Israel. Israeli Prime Minister Netanyahu even named a new settlement of the Golan Heights after Trump, with a large monument spelling out the new name “Trump Heights” in both Hebrew and English.

Not surprisingly, Israel also has a decade-long conflict with Iran. It would take another article to get into all the specifics, but suffice to say, both Iran and Israel have been in a proxy-type Cold War with each other since 2005. Iran considers Israel to be an illegitimate Zionist regime on Arab land and has often threatened to wipe Israel off the map. Iran is politically supported by Syria and Lebanon, while using Hezbollah and Hamas as proxy fighters. Israel naturally identifies Iran as a threat and works to limit Iran’s nuclear capability. Israel is supported by the US (and to a lesser extent, Saudi Arabia), while relying more on their own Israeli army for defense as opposed to other proxy militant groups (the MKO and PJAK groups being the exception).

Which brings us back to the current situation with the recent airstrike in Iraq. I don’t know how this situation will play out, but part of me feels that this conflict benefits the security of Israel more than it does the white middle-class that voted for Trump. Many people rightly criticize Trump for doing more for Israel than the white middle-class of America. After all, Trump has helped secure Israel’s border walls and has also recently made an executive order identifying Jewish people a protected class. Mark Levin has even labeled Trump “the first Jewish president of the USA.”