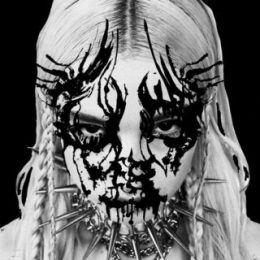 Poppy, the mildly unsettling YouTube sensation-turned-bestselling pop singer, released her newest album on January 10th. It’s called I Disagree, and it’s an apt title — much of this record is a violent, abrasive eschewing of both Poppy’s previous work and the rules that govern music in general, much like the hyperpop sensibilities of breakthrough act 100 Gecs or veterans of the deconstruction genre like Grimes, who also collaborated with Poppy on a previous album. Poppy isn’t just relying on her contemporaries for inspiration, however. There is a discernible industrial and nu-metal influence present on I Disagree that could be compared to Marilyn Manson, Rammstein, or countless others. The absurd combination of genres as diverse as metal, dubstep, synthpop, glitch, and trap creates a soundscape that is certainly self-parodying, but is also curiously pleasant.

I Disagree is also the last full-length effort that we’ll see come from the production duo of Poppy and Titanic Sinclair. Poppy announced the end of their working relationship on Twitter in December, citing his recent publicized suicide attempt and other behavior. Poppy and Sinclair are not strangers to controversy, either. This statement comes after Poppy defended both herself and Sinclair from accusations that he stole the persona of Mars Argo, a former collaborator of his, in order to create the “Poppy” media personality.  The three settled a suit Argo filed in court claiming damages for the infringement on Argo’s rights to her character, and the alleged abuse she faced at the hands of Sinclair during and after their working and personal relationship.

One of the stipulations of this suit was that Argo would now be in charge of her “character,” and all of the copyrights pertaining to it. The suit was settled on January 3rd of last year, the preceding legal battle coinciding with a remarkable change in Poppy’s public image. No new videos in her signature washed-out, pastel style were uploaded to her channel since December of 2018, and her music took a drastic turn away from bubblegum pop to ambient experiments or glossy metal. The end result is peculiar; the perfectionism of pop music is plainly evident in her recent releases and I Disagree specifically, pushing her headbanging harangues into uncanny valley. Is it metal? Is it pop? Is it an android’s best impression of thrash music? Does the concept of a genre still hold merit in music today? Perhaps the goal of this plastic record was to make us ask these questions, rather than provide us with any answers.

The album is opened by “Concrete,” a track that puts the odd juxtaposition of Poppy’s saccharine soprano and the eerily perfect metal instrumental on full display. Beginning with the howl of an air raid siren and muffled percussion like that one would find in an anime OP, Poppy implores some unknown person to “bury her six feet deep” and “turn her into a street.” Such a request is a far cry from the Poppy that used to glibly sing about making money, being gorgeous, or falling in love with her laptop. A plainly Slipknot-influenced interlude separates this opening passage and a synthop section (plus blast beats) full of repetition about sugary treats and more. This head-spinning shift in subject matter is the album’s distinctive mark, and we’re introduced to it early on. Also included in “Concrete” is a particularly nasty, yet still slightly too immaculate breakdown that could send a dingy venue full of hardcore kids into a fit of moshing. Poppy then tells the listener about various foods she’s tried to enjoy and how none seem to compare to the taste of blood in her teeth. Charming girl!

“I Disagree” opens with the lines “Watashi wa anata ni dōi shimasen,” which roughly means “I disagree with you” in Japanese. It’s an ill-fitting bit of kawaii poptimism that Poppy utters under her breath atop the syncopated ringing of a grime beat, before a rather generic metal rhythm takes over. The entire circus feels manufactured, which would be an indictment of most other pop musicians, but glowing praise for a woman gleefully chanting about setting things on fire and dying amidst the spectacle. The self-aware nature of this music unveils an important truth. Most pop is easily mass-produced; people listen to it en masse regardless. Applying the same formula used to make radio hits to a genre commonly regarded as underground exposes the underlying sameness of almost all music today.

“BLOODMONEY” is the centerpiece of the record. It begins angelically; Poppy asks the listener what they believe when nobody is watching. The choral delicateness quickly vanishes and is replaced by a furious square drone over 4:4 industrial slamming and tormented synthesizer modulation; the instrumental was described by Sinclair, the producer of most of this album, as his attempt to “break [his] Moog synthesizer without touching it.” Early industrial was clearly a major reference point for much of “BLOODMONEY,” especially in the use of the aforementioned tortured Moog and Cabaret Voltaire-like bleeps and boops interspersed among the incessant, but simple drum pattern. In these heavy moments, Poppy sheds the personal narratives and frustrations of the previous tracks and instead becomes a reckoner:

Following “BLOODMONEY” is the curious track “Anything Like Me.” It has a similar introduction, being quiet and friendly. Poppy refers to another girl’s heartbeat inside her chest, which many have interpreted to be a reference to Mars Argo. Perhaps there is more than surface drama, however. The buzzy, mid-2010s SoundCloud inspired rhythm that follows punctuated by violent stabs of noise, guitar, and drum give backbone to the repeated screech of “you shouldn’t be anything like me; you’ll never be anything like me!” Poppy, the android-like goddess character of Internet-age paranoia and destruction, is warning her imitators rather than chiding them. The Poppy of yore would often taunt listeners and viewers with the fact that they couldn’t imitate her if they tried. Following the Argo case, where it was made clear that Poppy’s act is not unique in the world, her tone has changed substantially. To be a “Poppy” is a dangerous act. The suffering one could expect from playing such a role, whether it’s in the form of abuse at the hands of your producer or the trappings of fame, is expressed in the aggression of this song’s instrumental. “Anything Like Me” was also one of I Disagree’s singles; likely for good reason.

“Anything Like Me” ends rather abruptly, providing a disjointed transition to the misleadingly pleasant synthpop introduction to “Fill the Crown.” The influences on “Crown” are even more scattered than other tracks on this record, drifting from the digital chops of Grimes (“fill the crown, let them know we’re fed”) to guttural, Korn-like screams and references (“follow the leader!”) There’s even an acoustic guitar bridge! The end result is a track capable of giving even the most focused of listeners musical whiplash. Genre has little meaning on this album; to characterize it as “metal” would be to miss the point. Despite the dizzying array of archetypes present on any given track, the final product is still cohesive and digestible as an individual unit precisely because the formulas used to write pop music were employed without discrimination. “Crown” is not metal, nor synthpop, nor singer-songwriter or electronica. It is loosely “music.”

“Nothing I Need” is a lamenting track built around a Beach Fossils-like drumbeat and dreamy, chillwave synthesizers. Poppy maintains a quiet soprano throughout the track, discussing her dissatisfaction with her fame. It’s a forgettable track, mostly because it sounds like something Poppy would have made 5 years ago. It’s also the album’s second most short, at 2 minutes 49 seconds, being an unfortunate example of filler.

“Sit / Stay” is a world of difference from the previous song. It begins sounding like something off the Hotline Miami soundtrack, with a glaring, overdriven synthesizer modulating itself at an enervating speed amidst filtered drums before a clanging, bass-filled breakbeat takes over the whole spectacle. Poppy sings in a staggering cadence, breathily piercing the industrial veil. In quieter moments of the track, much of the cacophony sans the kick drums are dropped. The track is at its most poignant here:

In similar fashion to “Anything Like Me,” fame has made a monster. Rather than whine about it, the music suggests we break dance.

“Bite Your Teeth” is only 2 minutes 42 seconds long, jumping rapidly between metalcore and nursery-rhyme hypnotization. The repeated suggestion, the impossible act of biting your own teeth, makes up the majority of the song’s lyrical content. “Bite Your Teeth” may be the album’s most intimidating track, as it contains both the record’s heaviest breakdown and its softest pauses; there is an overwhelming sense of mania that possesses “Bite,” which is perhaps disquieting or unsettling to the listener on its own, but more evidence of Poppy’s ability to strike at the heart.

“Sick of the Sun” begins with clipped, surf-like chords. These fall into a typical trap rhythm, like something played on an R&B station. Musically, this track is painfully boring. Poppy sings in chorus-verse-chorus-bridge pattern, mostly about wishing the sun would go away, a thinly veiled reference to a hermit-like depressive state. Interestingly enough, it’s Poppy’s attempts at being topical that drag this album down. Mental health? The trappings of fame? These tropes are tired. Poppy is at her best when telling the listener to delete their Twitter and beg God for forgiveness.

The final song is titled “Don’t Go Outside.” An acoustic arpeggio flutters over the top of ambience as an introduction. Poppy is whispering a perverse lullaby, telling the listener to stay indoors, lock their doors, and close their eyes. It is a gentle apocalypse, full of television screens spelling doom to an audience that can only tolerate the spectacle in their pajamas. A clipped techno break is thrown into the mix as well, alongside Biblical threats of amphibian rains, before a puncturing riff shreds into the soundscape. Poppy then promises the listener — or perhaps, herself — that everything will be okay. If Poppy’s goal was to kill her former persona, she has certainly succeeded; but at what cost? She now lives in a world where she is no longer her own (or humanity’s) savior. All that’s left is the husk of a social media following adoring a character that was never her.

“Don’t Go Outside” ends with an interpolation of “Concrete,” “I Disagree,” “Anything Like Me,” and “Fill the Crown,” callbacks to the murder of her persona and the empty space it has left. Poppy is 25. Like many in her age group who spent a large amount of time on the Internet, she’s witnessed pathological human behavior that ranges from fame-seeking to the damage done to one’s brain when its reward pathways become tied to likes, shares, and comments. Poppy’s persona used to be an absurd, albeit critical, analysis of the online experience. Now that there are no meta-references left, who is Poppy? Who is anyone still on the Internet today?

Detractors of our cause have spent the last several years attempting to remove us from the online sphere, often to great success. But they are defined merely by their tolerated existence on platforms designed to destroy the human mind. If we’re unwelcome on the same services that drove a young woman to fits of screaming, then we’re probably on the right side of history.