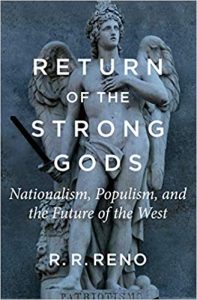 R. R. Reno
Return of the Strong Gods: Nationalism, Populism, and the Future of the West
Washington, DC: Regnery Gateway, 2019

Most of the people who come to the Dissident Right do so in spite of the Dissident Right. It is a common experience for those who become red-pilled to discover that the hatred they have experienced from the Establishment for the “sins” of being white or heterosexual or male is matched in vehemence by the hatred exhibited by many on the Dissident Right for those whose “sins” consist of having been born between the years of 1946 and 1964 or for being believing Christians. I know that there are many “silent” members of the Dissident Right whose views are not even expressed anonymously, but who have decided to remained cloistered—not out of fear of being doxxed—but out of a desire to limit the explicit hatred they endure to that from just those whose politics they oppose.[1] [2]

I have argued in these pages and elsewhere that the Dissident Right only exists as an intellectual movement. It has been, and continues to be, completely bereft of any political leadership. Indeed, before it can even begin to entertain the idea of engaging in real political activity, the Dissident Right must learn how to educate and persuade white people of the rightness of our cause. This will involve engagement with caucasians of all stripes, including Baby Boomers and Christians.[2] [3]

R. R. Reno’s Return of the Strong Gods: Nationalism, Populism, and the Future of the West is an important book and one that needs to be taken very seriously by the Dissident Right. The author demonstrates that the origin of our current situation is much more complex than that put forward by the standard Dissident Right narrative. Furthermore, he presents a critique of laissez-faire capitalism, globalism, and radical individualism from a Christian standpoint that is as withering as anything emanating from the pagan Dissident Right.

Reno is a former Episcopalian who converted to Catholicism. He received a doctorate in theology from Yale and taught theology at Creighton University for twenty years. Currently, he is the editor of the Catholic journal First Things, which is gradually coming over to an editorial stance that is receptive to many of the ideas of the Dissident Right.

Reno’s thesis is that the generation that experienced the horrors of World War II came through that conflict with an understandable desire to prevent such a cataclysm from ever occurring again. With the best of intentions, they created a postwar consensus that sought to downplay what Reno calls the “strong gods,” that is, “the objects of men’s love and devotion, the sources of the passions and loyalties that unite societies” (p. xii). This movement was heavily influenced by Karl Popper’s book The Open Society and Its Enemies (1945)—a book that was an expansion upon Max Weber’s concept of “disenchantment”—in which Popper argued that to avoid another world war it was necessary to “open up” society by emphasizing the individual over group solidarity. As Reno explains it, this can be summarized as the abandonment of the “strong god” of truth for the “weak god” of meaning. In Dissident Right terms, we would most likely refer to this shift as the abandonment of the biological imperative for the caprices of self-actualization.

The proponents of the postwar consensus believed that they were creating a post-ideological polity, one based entirely on the empirical results of social science research. Reno acknowledges that Popper himself was aware of the paradox that his position creates an ideology that is ultimately inflexible and hostile to dissent:

Reno then shows that the influence of two other books, Friedrich Hayek’s The Road to Serfdom (1944) and T. W. Adorno and Max Horkheimer’s The Authoritarian Personality (1950) contributed heavily to the process of “weakening” and “disenchantment” that has brought Western Civilization to its current predicament. In the former book, man is reduced by laissez-faire capitalism to the status of an atomized economic unit in which economic rights and individual economic freedom obviate the need for moral normativity. In the latter book by the two doyens of the Frankfurt School, any type of patriarchal family is a breeding ground for fascism and must be opposed.

While the pagan Dissident Right often talks about the Faustian nature of the white race (and very correctly, I believe) in which exploration, creativity, and an aristocratic disdain for the quotidian predominate, and in which the pursuit of truth and excellence results in an acknowledgement and celebration of true difference, Reno rephrases this pursuit of truth and excellence as the search for the transcendent. Here is an important nexus between the pagan and the Christian Dissident Right. Whether one aspires to the condition of the Übermensch or to eternal salvation, the Dissident Right is ultimately concerned with something beyond the self. The individual is not an atomized economic unit, and identity is not endlessly malleable.

In the very excellent chapter entitled “Therapies of Disenchantment,” Reno explains that postwar educators sought to keep the traditions of Western Civilization and liberal education but to reduce their authority by “shifting from truth to meaning, from conviction to critical questioning” (p. 38, italics in original). As Reno quotes from The Open Society, Popper states:

If in this book harsh words are spoken about some of the greatest among the intellectual leaders of mankind, my motive is not, I hope, the wish to belittle them. It springs rather from my conviction that if we wish our civilization to survive we must break from the habit of deference to great men. (p. 39)

Of course, if there is no authority, and education is no longer a pursuit of truth, but is rather a process of critique, what is the goal of all of this? As Reno explains, the goal is the production of “meaning,” that is, to deny truth and to demonstrate that institutions, ideas, works of art, and historical events are products of economic, racial, social, and cultural conditions and have no intrinsic merit. For example, Mozart’s 40th Symphony is not one of the greatest instrumental works in Western history; it is, instead, a product of a class-ridden, racist, and misogynistic society in which similarly great symphonies by female, non-cisgendered, and persons of color were not allowed to be composed. By this logic, anything that attracts our interest, our admiration, and our loyalty must be “problematized” so that the process of disenchantment can never be abated. The Cold War mitigated to a certain extent the ever-downward course of this process of disenchantment; however, as the author points out, once begun, the weakening forces of disenchantment “tended toward pure negation, leaving us a utopian dream of politics without transcendence, peace without unity, and justice without virtue” (p. 75).

The tragedy of liberalism as described by Reno is its “smallness,” its rejection of greatness and transcendence, its celebration of diversity without difference, its abhorrence of any form of discrimination including discriminating taste. As the author so eloquently phrases it:

A society lives on answers, not merely questions. The political and cultural crisis of the West today is the result of our refusal—perhaps incapacity—to honor the strong gods that stiffen the spine and inspire loyalty. (p. 95)

What then, is to be done? According to Reno, what will not work is “never-ending critique, the spontaneous order of the free market, technocratic management of utilities, and other therapies of weakening” (p. 140), because “the actual problems we face—atomization, dissolving communal bonds, disintegrating family ties, and a nihilistic culture of limitless self-definition—go unaddressed” (p. 144). Reno proposes:

Reno is not completely red-pilled. He is still too much of a civic nationalist for my taste, but his intellectual evolution has been remarkable, especially for one who only four years ago was a never-Trumper. His book strengthens and gives greater insight into the standard Dissident Right narrative of how we got to the current year. He explains the intellectual history of the postwar era in a way that is accessible and appealing to intelligent normies and can help to move them ever so closer to our side. And for that he deserves our praise and gratitude.

[1] [4] For instance, a friend of mine — who is a DBB (Dreaded Baby Boomer), an evangelical Christian, and a high-ranking official in my state’s GOP, and who has no idea of my involvement in the Dissident Right — last year attempted to red pill me and gave me a list of websites I should peruse, one of which was Counter-Currents. My friend even goes to the trouble of using anonymous means of contributing to a number of Dissident Right entities, a wise idea given her position. She does express some trepidation about the Dissident Right’s hostility to Christianity, but takes it in stride as just one more cross to bear. Wouldn’t it be nice, though, if the Dissident Right actually created a welcoming environment for those who share our beliefs?

[2] [5] The Charlottesville incident has had the salutary effect of eliminating or marginalizing the influence on the Dissident Right of the SS-wannabes with mother-in-law fetishes, the vulgarians with daddy issues, and the upper-class twits with trust funds. As the eminent blogger The Z-Man so eloquently put it in a recent podcast: “No one is going to buy Richard Spencer 2.0.” All of this has allowed gifted communicators for the cause of Caucasians to come to the fore — including No White Guilt, The Great Order, and the Z-Man himself among others — who are not overtly hostile to white Baby Boomers (whose votes and $7 trillion in assets could prove to be very useful in the coming struggle) and white Christians (who engage in the type of family formation that is essential for the survival of the white race).