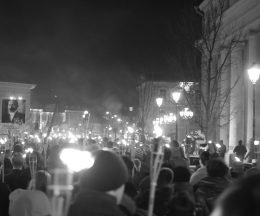 Lithuania’s Independence Day is February 16. The country celebrated its 102nd birthday on Sunday, but the history of the Lithuanian land, language, and people goes back hundreds of years further. I was able to celebrate the weekend with friends at a nationalist conference and a torchlight march. Yet one of the most memorable parts of my trip was a late-night walk where I reflected on all the Lithuanian nationalists that risked their lives for independence; particularly the Forest Brothers.

The history of the Lithuanian people can be traced back to the tribes that settled near the eastern Baltic coast. Since this area didn’t experience much contact with foreigners until the Viking raids of the 9th-11th centuries, these tribes were able to maintain their language and pagan religion far longer than the rest of Europe. The Lithuanian language is also considered one of the oldest and most archaic languages of the world, maintaining features that many linguists consider potentially related to the first Proto-Indo-European language.

Lithuania is also known as the last pagan stronghold in Europe, having only “officially” adopted Christianity as the state religion in 1387. It was during this time that the Lithuanians would fight off invading forces such as the Teutonic Knights. These constant invasions gave rise to the creation of Trakai Castle, one of Lithuania’s most famous sites. By the 16th and 17th centuries, Lithuania would join its neighbors in creating the Polish-Lithuanian Commonwealth, the largest geographic power in Europe at the time. However, by 1795, the Commonwealth was dissolved and Lithuania was absorbed into the Russian Empire, wiping it off the map until 1918.

Near the end of World War I, a group of ethnic Lithuanian intellectuals came together with the goal of restoring Lithuanian independence. Starting with the Vilnius conference in September 1917, they would eventually elect a council that would draft and sign the Act of 16 February. This document, signed on the eponymous date, proclaimed the restoration of an independent Lithuanian state.

WW2 placed Lithuania under German control initially, but later under Soviet occupation. The few signees to the Act of Independence that stayed during Soviet occupation became political prisoners: Pranas Dovydaitis and Vladas Mironas were sent to Siberia and died in work camps, and Kazys Bizauskas was captured in 1941 and is believed to have been shot en route to a Soviet prison in Minsk.

This period also gave rise to the Forest Brothers, a collection of partisan fighters in each of the Baltic states that waged guerrilla warfare against the Soviet Red Army and the NKVD during and after WW2. Of the three Baltic countries, the Lithuanian Forest Brothers were known to be the best organized and most effective. When not in direct combat with Soviet troops, they conducted ambushes, sabotaged supply lines, and assassinated Soviet officials.

Their bravery came at substantial costs. The Forest Brothers who were captured by the Soviets were often tortured and their relatives faced deportation to Siberia. One such case was Adolfas Ramanauskas. His autopsy report in 1956 gave descriptions of torture too explicit to be written here. Another fallen soldier is Juozas Lukša, who escaped to the West but returned to Lithuania in 1951, where he was soon killed by the Soviets. The last Lithuanian Forest Brother to be killed was Pranas Koscius in 1965.

On March 11, 1990, Lithuania’s independence was restored. There were some economic embargoes and a border conflict known as the Medininkai massacre where eight Lithuanian border guards were killed. Yet in 1992 a constitutional referendum had been voted on and by 1993 Lithuania had its first elected president.

This brings us to the current Independence Day celebration. As much as I enjoy nationalist conferences, they always tire me out. Saturday was no exception. The second Prabudimas (awakening) conference was held by Kryptis, a Lithuanian youth group for aspiring nationalists. The conference included speeches from such notable people as Fróði Midjord, Tiina Wiik, Millennial Woes, and Ruuben Kaalep, along with other local prominent figures. I had a great time meeting new people, chatting with old friends and listening to all the amazing speeches, many of which were improvised yet still very captivating and insightful. After the conference, I was invited out to have dinner with the various guests and speakers. Unfortunately, I didn’t get much sleep the night before and felt tired, so I told everyone that I would walk back to the hotel and catch up on rest for the next day’s events.

On my walk home, I saw lots of people out and about preparing for the weekend celebration. I passed by several people hanging Lithuanian flags outside their apartments. Younger people were out carrying party supplies and drinks for the next day’s festivities. And despite it being late in the evening and cold, many people were out walking their dogs. I saw various dog breeds, some of which I used to have as pets. While I don’t usually strike up conversations with random people in public, I ended up briefly chatting with three dog owners on my way back to the hotel.

While waiting at a crosswalk, I saw a Lithuanian man and his daughter walking their friendly, slightly-overweight pug. This reminded me of the pug-mix I rescued and used to walk around Seattle each day after work. I was only there for two years, but quickly noticed the city becoming more dangerous as the demographics become more “diverse.” No such thoughts even crossed my mind in Vilnius: I felt completely safe.

A few blocks down the boulevard, I saw a middle-aged couple walking a Boston Terrier with a thick jacket on. As I walked past them, I told them that I used to have a Boston Terrier that hated cold weather. The couple told me that their dog used to be the same way, but that it eventually got used to the Baltic winters. I rescued my Boston Terrier from Texas but took her with me to Massachusetts when I relocated for work. Being new to the area, I quickly realized that there were neighborhoods that weren’t safe to walk through, especially at night. Yet here I was, late at night in Lithuania, actually looking for different neighborhoods and paths to explore on my way back to the hotel.

As I walked through the park near my hotel, I saw two elderly Russian women walking a Scottish Terrier. I briefly introduced myself in Russian and told them that my first dog was a Scottish Terrier and it was my best friend growing up. After introducing their dog, the women told me that both of them were from different parts of the Soviet Union but had relocated to Vilnius when they were young. While each of the Baltic states dealt with issues regarding their Russian minority populations to varying degrees, it was nothing in comparison to the problems and violence that non-white minority groups cause in white societies.

To me, Vilnius represents everything that we desire and work for as nationalists. I was able to walk late at night in a racially homogenous community without a thought or concern about my safety. I was able to experience, with my own eyes, people excited to celebrate their history, culture, and ethnicity without fear of being shamed or called anti-white slurs. Furthermore, I kept on thinking about the Forest Brothers and all the sacrifices they made in the hopes of one day having an independent country of their own. I’m sure all those soldiers would have preferred walking their dogs at night than hiding in a ditch during winter under fear of death or torture. I’m sure the signers of the Independence Act would have much rather held parties with their friends and families than being worked to death in Siberia.

I spent the weekend with nationalists who talked about ways to fight censorship, deplatforming, and anti-white propaganda. I met with young Lithuanians who wanted to stand up against demographic displacement. We face enemies and challenges that seem impossible to defeat, let alone survive. However, the Forest Brothers also faced insurmountable odds, and I know that I wouldn’t have been here that weekend if it wasn’t for their sacrifice. In this regard, I humbly thank and salute all the Lithuanian and Baltic people that fought for their independence throughout the years. I am also very thankful and honored to have taken part in the torchlight rally, where the Kryptis youth group and fellow nationalists are continuing to carry the torch of their ancestors: A torch that keeps the flame of a free and independent Lithuania burning bright for years to come.