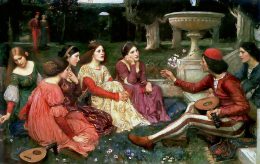 John William Waterhouse, A Tale from The Decameron, 1916.

The Decameron is a novel that is often overshadowed by The Canterbury Tales despite sharing many similarities. Both were written in the 14th century and have a similar narrative structure of various short stories being told by a group of characters. Both works have also played a crucial role in the evolution of the literature and the vernacular language of their respective countries. Written by Giovanni Boccaccio around 1353, The Decameron tells the story of 10 people (seven women, three men) taking shelter from the Black Death in a villa outside Florence. Over the course of 10 days, each character tells a story related to a chosen topic each day, ranging from comedies and tragedies to philosophical parables and social satire. This leads to 101 stories: 10 stories from each of the 10 characters, with the 101st story being about the developing friendships and relationships between the storytellers.

I have thought a lot about The Decameron this past week as the numbers of deaths and infections attributed to the novel coronavirus have continued to grow. For the past two months, I have been planning a trip where I would visit friends in eight countries over a two-week period. I first met all these people at various nationalist meetings in 2019, including the three Scandza Forums and the Awakening conference in Finland. I have been very fortunate to have made friends at these events and I have stayed in contact with them over the last several months.

With growing concern over the new coronavirus, and what appears to be a potential worldwide pandemic, I have been seriously debating whether to travel at all these next two weeks. This has been a difficult decision for me. I always try to be a man of my word and feel guilty backing out of plans or promises I make to people. And for the past two months, I’ve been making specific plans with my friends for this two-week period. I have also already paid for most of my flights.

My gut instinct, however, is to postpone my trip until the threat of this virus has died down. I would not want to catch this disease, and I definitely would not want to get any of my friends sick. I would rather err on the side of safety than to take the risk of infecting others, just to not lose money on a purchased flight ticket. I’ve discussed these issues and concerns with all the individuals that I’ve made plans with. To my surprise, most of them have said that I should visit them regardless of the potential risk of contagion. Their most common response to me was “whatever happens, happens!”

Perhaps there is some truth to this viewpoint. Yes, I could easily spend the next two weeks quarantining myself in my room. After all, I have enough fantasy books, video games, and heavy metal albums to keep me hibernating longer than a Japanese hikikomori teenager. But what type of life would I be living? Sometimes, the most memorable moments in life are the times you spend not just by yourself, but with others. By canceling or postponing my trip, I know that I would definitely be missing out on some exciting activities and experiences with my friends.

On a similar note, my friends have often expressed that this virus, or any pandemic for that matter, is something that is ultimately out of our control. So why change my life and plans over something that I have no power over? I definitely agree with them in this regard.

Nevertheless, my conscience keeps warning me about responsibility. While there are things that we can’t control, we can at least take actions and precautions on the information that we have. If I caught an unknown disease while traveling and got others sick without knowing I was contagious, then that is something I have no control over. But if I knew ahead of time about a disease with a high infection rate and still decided to travel, then I feel that I would be negligent and responsible for spreading that disease. This is why I have made the decision to postpone my travel plans and not visit my friends during the next two weeks, despite the guilt of breaking my word and letting my friends down.

My travel plans included meeting with friends in Scandinavia, the UK, the Balkans, and the Baltic. I was planning to go sightseeing with friends in both rural towns and large metropolitan areas. One friend was going to take me to a concert in the Alps. Another friend was going to take me to the Rijksmuseum so that I could finally see Rembrandt’s The Night’s Watch. I was looking forward to trying traditional Balkan food and then traveling to the Baltic to take part in two Independence Day celebrations.

It would have been an amazing journey with unforgettable experiences. But the reality is that I don’t think I would have truly enjoyed the trip with the ongoing sickness panic. Even if I didn’t get sick or get stuck being quarantined on a flight, the constant fear and worrying would have impacted the trip and the time with my friends.

If friendships are the building blocks of communities, then it is only natural for these communities to require the strongest friendships. Like all relationships between people, maintaining friendships isn’t easy. It takes patience, effort, and social skills. I always try to reach out to my contacts and colleagues on a regular basis, whether it be a text message, email, or a weekly chat on Skype or FaceTime.  I also try to let them know when I’ll be in their area and always try to plan an event for us or invite them out for dinner and drinks. It seems simple, but trust me, it takes work. Even with the best efforts and intentions, sometimes events have to be delayed or canceled. Sometimes friends drift apart.

Both The Canterbury Tales and The Decameron focus on a group of people who talk about life, death and all the various experiences in between. While I’m glad I read Chaucer’s classic, I definitely prefer The Decameron. I find its stories more enjoyable and the themes discussed more relevant and memorable. One of those themes is friendship; particularly how friendships endure in times of hardship and uncertainty.

I’ll be re-reading The Decameron over the next two weeks during the time that I would have been traveling and visiting my friends. I’m sure it will remind me of the current outbreak and spread of the new coronavirus. Yet it will also remind me of my friends. While I would much rather be sharing stories and drinks with them, I encouraged all my friends to simply hold off on our plans until it is safer to travel internationally. I will continue to stay in touch with them, just as I will continue attending nationalist events. Diseases and outbreaks come and go. People live and die. Yet our ideas and goals carry on through the events, friendships, and communities that we are building today. Whether it be Erkenbrand, the Scandza Forum, or the Awakening conference, I look forward to seeing you at the next event.

Until then, be sure to stock up on food, water, zinc, and face masks. Just in case.