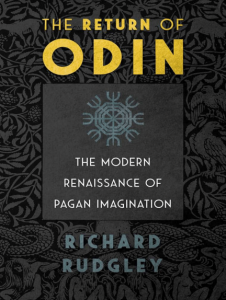 Richard Rudgley is a British author who has published several books offering unconventional interpretations of the ancient and prehistorical eras of Northern European history, as well as works on psychedelics. In 2004 he presented two documentary serials, Secrets of the Stone Age and Pagans, for the UK’s Channel 4. In more recent years his interest has shifted towards Northern European paganism. The venerable publisher Inner Traditions has recently published his The Return of Odin: The Modern Renaissance of Pagan Imagination, which is a reprint of 2006’s Pagan Resurrection: A Force for Evil or the Future of Western Spirituality? — the latter of which more accurately reflects the book’s themes. The new edition is identical to the original apart from a brief new Preface by the author which attempts to show how the book’s thesis has been borne out in the intervening years.

The book begins with promise by discussing C. G. Jung’s famous “Wotan [2]” essay from 1936, in which he asserted that the father god of the pre-Christian Germanic religion is a fundamental archetype of the German mind. In the ancient sagas, Wotan is full of contradictory impulses, being understood as both a deity of wisdom as well as of war and frenzy, among many other characteristics. Jung believed that Wotan was reintegrating himself in the German mind after having been buried and repressed by alien Christianity for millennia, as reflected in the rise of Adolf Hitler’s National Socialism. Rudgley contends that this reintegration was genuine and that it persists into the present day.

In the first chapters, Rudgley offers a brief summary of the Norse pantheon and some of its myths, and its links to the Indo-European tradition more broadly, as well as the significance of the runes and other elements of what we know about how the ancient Germanic religions were practiced. Particularly notable is his discussion of útiseta, a practice which involved sitting on burial mounds to commune with the dead; some surviving evidence tantalizingly suggests that this might have been an ancient Nordic form of meditation.

Rudgley then proceeds to discuss how interest in Nordic religion slowly began to reemerge in Germany in the nineteenth century, particularly in art, literature, and philosophy. This soon led to the appearance of Germanic neopaganism in the early twentieth century, and such groups as the neopagan Ascona community in Switzerland and the Wandervogel youth movement in Germany are briefly surveyed.

It is in Chapter 9 that the book begins to go off the rails, however, by excessively focusing on the relationship between Nordic religion and Nazism and other forms of violence — and in some cases, on events that had nothing to do with paganism at all. Rudgley first discusses the rise of National Socialist ideology and anti-Semitism in Germany, despite the fact that he concedes that this had nothing to do with Odinism. Early Germanic neopagan figures such as Guido von List, Siegfried Kummer, and Friedrich Marby are briefly outlined, primarily in terms of how their ideas fed into some marginal groups that were affiliated with the Third Reich (which, it is important to note, never promulgated Odinism as its faith). This culminates in a chapter on Karl Maria Wiligut, a self-proclaimed mystic who was for a time an advisor to SS leader Heinrich Himmler, and who dubiously claimed to be descended from an ancient line of Germanic pagan priests whom he knew through ancestral memory. While these topics are relevant and shouldn’t be overlooked, it sets the narrow and negative tone for the remainder of the book — not to mention that these subjects have been dealt with much more thoroughly in other works, such as Nicholas Goodrick-Clarke’s The Occult Roots of Nazism, Stephen E. Flowers’ The Secret King, and Eckehard Lenthe’s Wotan’s Awakening (the latter of which has only recently been translated into English).

After this, following a brief discussion of the influence of Germanic mythology on J. R. R. Tolkien, The Return of Odin essentially becomes a catalog of horrors which Rudgley contends demonstrate his idea that Wotan’s reintegration is ongoing throughout the Western world — although oddly enough, after 1945, he focuses almost exclusively on America and Britain to demonstrate this. Rudgley claims that Charles Manson, mass shooters, and serial killers are all part of this phenomenon, drawing on French sociologist Denis Duclos, who believed that such acts of apparently random violence reflect Wotan’s berserker quality. We then get many summary discussions of American neo-Nazi groups and figures such as Aryan Nations, the American Nazi Party, William Pierce and his Turner Diaries, Timothy McVeigh, and the 1980s terrorist group The Order — all of which, we are told, prove that Wotan is manifesting again in the Western psyche, despite the fact that none of these groups or individuals claimed to be Odinist.

Returning somewhat to his subject, Rudgley then spends a great deal of space discussing David Lane, the late Klansman and Order veteran who tried to establish his own Wotan cult while serving a life sentence in prison. We are also told about other marginal neo-Nazi groups which have professed Odinism, the nonsense about the alleged esoteric basis of National Socialism espoused in pulp tomes like Morning of the Magicians and The Spear of Destiny, and the “esoteric Hitlerism” of the Jungian Chilean writer Miguel Serrano. While these topics are interesting in and of themselves, they are all far too fringey to prove that the West is entering a new psychological paradigm, as Rudgley suggests.  It’s also not clear why Rudgley chose to focus exclusively on radical Right-wing groups; surely the much more widespread hippie and other countercultural movements which swept across North America and Europe in the 1960s and ’70s were even more indicative of a return of the pagan spirit in the West (something which Julius Evola also recognized)? They certainly more closely resembled the Wandervogel than any of the groups Rudgley brings in to prove his thesis.

After this long parade of monsters, Rudgley finally gets around to briefly discussing the more benign — and more interesting — forms of Germanic neopaganism that have arisen in recent decades, although only Stephen McNallen and his Asatru Folk Assembly, the UK’s Odinic Rite, Stav (a group based in Britain which holds that the worship of Odin should be open to all ethnicities and which understands the runes as tools for psychological counseling), and psychologist Ralph Metzner receive any detailed discussion. (The book, given that it was written in 2006, thus doesn’t cover more recent groups that have emerged, such as the Wolves of Vinland.) Strangely, post-war figures and groups of the Odinist revival from outside the Anglophone world, including Scandinavia, are ignored completely (Varg Vikernes, hello?), and even some major thinkers from within it, such as Stephen Flowers (aka Edred Thorsson), are only mentioned in passing. One can’t help but feel that this is the real meat of the book, given that if there is any “pagan renaissance” occurring through Odinism today, it is here — but unfortunately it is left as merely an afterthought.

There is the germ of an interesting book in the early and final chapters, but as it stands, they merely serve as bread between which the slices of processed Nazi baloney are sandwiched, which unfortunately forms the bulk of the text. It seems like Rudgley failed to resist the temptation to engage in sensationalism over substance. There are plenty of better books on subjects like Nazi occultism and Charles Manson already; of serious books on contemporary Odinism with depth, there are, unfortunately, very few. If a newcomer to the subject were to read The Return of Odin, he could be forgiven for concluding that Germanic Heathenry is nothing but a cloak for neo-fascism and murder — which is of course nonsense. This is particularly tragic given that the author clearly has the knowledge and sympathy to write an honest book on Odinism, as evinced in the occasional essays and interviews he has produced since this book was originally published in 2006.

Despite these serious flaws, Rudgley does make some interesting points here and there throughout the book for a reader already familiar with the subject, provided one is willing to wade through all the rehashing. It should not, however, be recommended to anyone as an introductory text (Stephen McNallen’s Asatru: A Native European Spirituality fulfills that function much more nicely). Nevertheless, there is enough of value here that I am hopeful that Mr. Rudgley will eventually be induced to write the genuine account of the Odinic revival that I am sure he has in him.