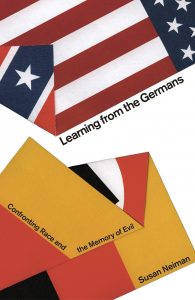 Susan Neiman
Learning From the Germans: Race and the Memory of Evil
Farrar, Straus, and Giroux: New York, 2019

Germans are notorious for their ethno-masochism. Their official identity is built on guilt and the need for atonement. Germans can only look back at their past with shame; pride is impossible. More Germans are challenging the national guilt cult, but it is still enshrined by the government and the culture.

“Moral philosopher” Susan Neiman argues for this change in her 2019 book, Learning from the Germans: Race and the Memory of Evil. Neiman, a Jewish scholar who has lived in Berlin for many years, wants Southerners to adopt the same ethno-masochism Germany imposes on its people. Vergangenheitsaufarbeitung (working-off-the-past) is the benign way of describing Germany’s relationship to its past. Neiman believes the Teutonic shaming and work towards a new future is ideal. She loves how the New Germany is multicultural, mulitracial, and dedicated to Enlightenment values. She argues that the South can follow a similar path if we tear down the statues celebrating Confederate heroes and impose guilt on their descendants.

The book is terrible, but I endured it for our readers.

It is mostly anecdotes from Neiman’s life and travels and interviews with liberal Germans and Southerners. The anecdotes reveal more about herself than her subject. She tells us in the introduction how she grew up in the South in a liberal Jewish family. Her mother volunteered for the ACLU and made sure her kids socialized with blacks. Neiman makes it very clear she hated the South and felt like an outsider. We then learn of her move to Berlin in the 80s, her move to America, her failed marriage to a German, her brief move to Israel, and then her move back to Berlin. She feels Berlin is the perfect place for outsiders like her, but she does complain that Germans are too philo-Semitic.

The introduction and concluding chapter are more like unhinged Facebook posts from your liberal relative than serious analysis. Neiman tells us how much she hates Trump, how Nazis rampage throughout America, and how Barack Obama was the greatest president ever. The rest of the book is thankfully bereft of this tone and mainly allows her interview subjects to speak.

Except for one Alternative for Germany (AfD) representative, Neiman exclusively interviews Germans who feel shame over their country’s past. The subjects only differ on whether Germany has made proper amends and whether East Germany was the proper model. Neiman is an unexpected apologist for the communist German Democratic Republic. While she insists that all Germans must feel bad for everything the Nazis did, she claims Germans just need to get over the Stalinist regime. In fact, Neiman argues that the GDR was superior in dealing with the Nazi past. Antifascism was explicit state policy in the post-war GDR, in contrast to the Cold War West. The GDR celebrated Germany’s capitulation as a victory and worked hard to indoctrinate Germans on the evils of the Nazis. It built monuments to the Soviet soldiers who supposedly liberated Germans. (The soliders’ mass rape of German women is never mentioned here.) The GDR paid reparations to the Soviets when West Germany did not. Neiman also claims the regime was much more hospitable to Jews than West Germany.

Neiman acknowledges that the Stasi was bad, but insists they only collected files on people. She spends several pages arguing that no comparison can be made between communism and fascism, because communism was founded on Enlightenment principles. Despite their crimes, communists were well-intentioned idealists who wanted to advance equality and justice. The fascists only wanted to advance their tribe’s interests at the expense of other people. Even though this describes nearly every tribe and nation’s value system since the dawn of time, Neiman sees it as a grave evil far worse than the 100 million killed by communism.

To her credit, Neiman is anti-tribalist across the board. She briefly moved to Israel but hated it. She couldn’t force herself to see Israeli commandos as her ethnic comrades and felt more at home among fellow cosmopolitans. “Tribalism will always make your world smaller; universalism is the only way to expand it,” she says in the conclusion.

While she praises both Germanies for their efforts to atone, she feels the West was inferior to the East for not purging all former Nazis and not making antifascism its founding principle. She does see improvement in the 1980s when German president Richard von Weiszaecker celebrated Germany’s defeat as a liberation. Since then, Neiman has found Germany’s efforts to work off the past a success. She loves that Germany built its main holocaust memorial in the center of Berlin, emphasizing this event as a core part of Germany’s identity. She supports Germany’s 2000 citizenship law that separated citizenship from blood, allowing the nation to imagine itself as only an idea. She is enamored with a naturalization idea that boils German identity down to globalist values. As one instructor tells Neiman of the three primary principles of the German constitution:

One: the dignity of the human being is inviolable.
Two: everyone has the right to the free development of their person so long as they do not harm the rights of others.
Three: everyone is equal before the law. The state supports the real equality of men and women and works to eliminate existing prejudice.

The Germans Neiman interviews express unbelievable amounts of ethnic self-loathing. All of them are horrified by their parents and grandparents and they believe Germany must base itself around Holocaust remembrance. The most loathsome figure she interviews is historian Bettina Stangneth, a shoggoth of a woman who believes Germany hasn’t atoned enough.

Stangneth sees her own people as morally repugnant and believes Germany should’ve never been welcomed back into Europe. Her extremism puts off Neiman. The other Germans are more moderate in their conclusions and feel the nation is working off its past as best they can. However, many of them do not believe Americans can learn from the Germans because Germans must accept their evil as the worst ever committed in the world; there is no comparison between the Holocaust and America’s alleged crimes.

Neiman believes that this evil should be universalized so other white nations can feel guilty about their crimes. She is livid that London and Washington have Holocaust Museums but no memorials to the horrors of colonialism or slavery. She believes every white nation needs to follow Germany’s example.

Her chapters on the American South are about what you expect. She spends most of her time in Mississippi, a state she hates. She mostly interviews Southern liberals and black professors about how the South can come to terms with its racist history. She believes the best way for the South to make amends is to no longer honor Confederate heroes. The South should instead lionize civil rights figures and those who opposed slavery. This would leave white Southerners with nothing to look up to. She also wants the education system to explicitly make Southerners feel bad.

Unlike in Germany, Neiman actually comes in contact with Southerners who oppose the guilt agenda. All of them express the healthy opinion that they shouldn’t feel bad about the past and think of their ancestors as heroes. Neiman does note that this consensus is starting to lose ground.

She holds up the University of Mississippi as an example of the “progress” occurring in the region. The university rioted over one black student trying to integrate the school in 1962. Now the Confederate flag and the singing of Dixie are banned from the school’s football stadium. The old mascot, Colonel Reb, was retired in favor of a rebel landshark. Student groups want the Johnny Rebel statue removed from campus. Ole Miss’s professors are nearly all libs who want to teach ethnomasochism to their students.

The campus is still pretty conservative compared to most American universities. Neiman records her disgust at good-looking fraternity and sorority members enjoying their Saturdays at The Grove — a famous tailgating spot — and how they refuse to be indoctrinated with self-loathing. She upholds the genteel Southern liberals as a much better example than the conservatives who prefer to go on living. There are problems with these students, but it’s not because they dress well and enjoy sports. They sit back and allow their institutions to be captured by people like Neiman.

There are, however, limits to how much they will tolerate.

Mississippi has a Confederate Heritage Month, and most of its lawmakers defend Confederate monuments. These conservatives could be better, but they are not about to succumb to the nauseating masochism advocated by Neiman.

Neiman, to no one’s surprise, supports reparations, and she believes all whites should pay up. She refutes claims from whites who are descended from post-1865 immigrants that they don’t owe blacks anything. Only whites enjoyed the full benefits of citizenship until the civil rights era, therefore they are complicit in black oppression.

The book routinely descends into liberal Facebook rants. She talks about Michelle Obama as the most beautiful first lady ever. She frequently calls Donald Trump the most unqualified man to ever become president. She claims conservative talk radio supports white supremacy. Most respected academics tweet similar arguments on a regular basis. We really shouldn’t think of these people as pillars of wisdom.

In her conclusion, she makes a strange criticism of “neoliberalism.” This is a popular term on the Left nowadays. Neiman attacks it for reducing everything to consumerism (valid critique), upholding biological determinism (what???), and being reinforced by post-structuralist assumptions about power (hmm). She thinks that power must be based on truth, but neoliberals undermine truth. She sees Trump as the pinnacle of neoliberalism, despite all neoliberals hating him for his immigration and trade stances. Neiman argues that neoliberalism gives rise to tribalism and this development must be stopped. We must rally around reason and the “common good” to defeat neoliberalism and tribalism. That’s unlikely to happen.

Neiman notes that Americans can’t adopt a similar level of self-loathing without being defeated in war. Germans accepted their guilt at the point of a gun. Americans prefer triumphalism and don’t have a reason to abandon that spirit. That’s both a good and bad thing. American history is portrayed as a victory for human reason and liberty. To put the nation’s crimes at the forefront would negate that optimistic spirit. Few Americans would be happy with a giant monument to shame us for subjugating the Indians.

The South is a different story because its Confederate honors are not tied to abstract values; it’s about ancestral pride and the whites who built the region.

Actual Southerners won’t embrace the ancestral guilt, but their number is declining in the South. The region is attracting whites from all over the country thanks to its tax policies and low cost of living. These new arrivals have little connection to the Confederacy or Jim Crow. They’re fine with denigrating the Southern past and tearing down the monuments. Business and Southern gentility are all that matter.

Southern guilt wouldn’t interfere with the larger nation’s triumphalism. The sordid Confederacy shows how the nation vanquished resistance toward progressive values. The nation can turn the Old South into a villain, not the nation as a whole. Neiman wants to take it a step further and impose shame on the whole nation. In her mind, all white Americans are equally guilty; there’s no difference between Rebel and Yankee. We all must atone and work off the past.

Racial and national shame prevent us from saving ourselves. That’s why people like Neiman support it.

The Dissident Right must combat this sickness — full stop. Our people have nothing to apologize for.