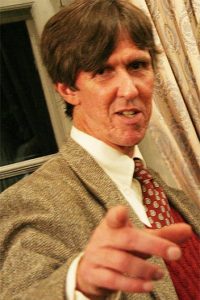 The Catholic writer E. Michael Jones is currently one of the most popular thinkers on the Dissident Right, owing to disaffected nationalists turning to Catholicism in the wake of Charlottesville. In their desperate search for a based Catholic thinker, these young right-wingers settled upon Jones. Jones’s many tirades against Jews and willingness to associate with the Dissident Right make him an appealing figure to aspiring Catholic reactionaries.

But many of his ideas are silly and wrong. Identitarians should stop seeing him as a serious thinker. Jones himself makes this case better than anyone in a December essay [1] on Sam Francis and the “Triple Melting Pot.” Jones infamously delivered the keynote address at a 2005 memorial event for Francis. Instead of honoring the late paleoconservative, Jones decided to criticize Francis and rant about the Jews. The December essay is intended to defend the speech and reaffirm one of Jones’ many silly ideas. The self-appointed Church doctor argues Americans are not divided by race. We are instead divided by religion, and faith defines our ethnic differences. He criticizes Francis — who he refers to as “Sam” to convey the impression they were friends — for failing to grasp this dynamic.

The essay on Francis exposes many of Jones’s unserious arguments and claims. He insists religious identity defends you from leftist attacks and elaborates on his odd Triple Melting Pot claim.

Jones expresses how amazing it was for him to participate in a Shi’a march in Dearborn, Michigan. Jones contrasts this march with Charlottesville and says it proves “religious identity is the only bulwark against the identity politics of the Great Satan”:

The Arbaeen March in Dearborn in which thousands of Shi’a Muslims marched unhindered to Henry Ford Park shouting “Long Live Hussein” is one example of what I’m talking about. If Antifa had showed up at this rally, they would have had to field thousands of demonstrators to contest the Muslims’ right to assemble. We’re dealing with hypotheticals here, but judging from the size and composition of the crowd, Antifa would not have come out unscathed from this encounter.

Why on Earth would Antifa protest a Muslim gathering? Antifa wants more Muslims and encourages them to defiantly express their culture. If anything, Antifa would cheer on the march. You might as well say the Right should don pink pussy hats because no Antifa tried to stop the Women’s March. There are no similarities between a minority religious festival and a political demonstration in support of white identity.

Jones points to Antifa not disrupting SSPX processions in Post Falls, Idaho as further proof the Left cowers when faced with religious identity. He also touts how the Bishop of South Bend ignored a request to condemn him. Jones cites this as proof the Catholic Church will defend intellectual heretics and implies God will protect him from Antifa:

[U]nlike “conservatism” or “whiteness” or any other confected identity, Catholicism confers an identity through baptism which cannot be taken away from its members by the self-appointed popes who, as recipients of oligarchic money, police the precincts of identity politics. Sam Francis was excommunicated from the synagogue known as conservatism by William F. Buckley, who with the help of Jewish money, had had himself named pope of that sect. The fact that the same thing didn’t happen to me at the hands of [left-wing reporter] Dexter van Zile is proof of my contention that the Catholic faith is a category which exists in the mind of God. As such, it cannot be contradicted by men. It guarantees protection from the predations of Satan and his synagogue on earth that no other identity can provide.

Humble is the man who thinks God stands between him and cancel culture.

This reasoning also ignores that Jones is a fringe figure on the Catholic intellectual right. First Things isn’t going to publish or defend Jones. Many writers condemn his anti-Semitism as un-Christian. Most reactionary Catholic writers stress their philo-Semitism to a comical degree. Leading integralist Sohrab Ahmari wrote a whole article [3] about how much he loves Jews.

Jones is not representative of the broader Catholic Right. One bishop ignoring a random journalist’s request does not indicate much.

Leftists react more violently to white identity than to religious identity because they see the former as a serious threat. They do not feel threatened by Catholic traditionalists living in far-away rural America. There would be violent demonstrations against religious processions if the Left felt religious identity threatened the power structure. But Religious identity does not challenge the powers that be. Elites certainly don’t like conservative Christians, yet they realize that people embrace such faiths in response to a loss of power. Smart leftists realize religious identity can at times be a safety valve, the original opiate of the masses before the Sackler family came along.

Evangelical Christianity became more popular after the Civil War and had a revival after the civil rights revolution. White Southerners turned to God to cope with their subjugation. Similarly, young nationalists disenchanted with the failures of the alt-right turn to traditional Catholicism as a coping mechanism. Many of them, but not all, feel it’s better to retreat to religion than to try to change the world.

Jones supports this development. He does not care about demographics or preserving European identity; it’s all a distraction from furthering the Catholic faith. Jones argues white identity is a trap and identitarians “play into the hands of their largely Jewish oppressors.” The real solution is to hope the Church turns everything around.

Jones’s contention that America is divided between three ethnic groups makes no sense in contemporary America. The Triple Melting Pot theory comes from Will Herberg’s 1954 book, Protestant, Catholic, Jew. Herberg asserted these three categories separate Americans and define who they are: “Unless one is either a Protestant, or a Catholic, or a Jew, one is a ‘nothing’; to be a ‘something,’ to have a name, one must identify oneself to oneself, and be identified by others, as belonging to one or another of the three great religious communities in which the American people are divided.”

This is nonsense and no longer applicable to modern America. Even in Herberg’s day, it was silly. It assumes white Protestant segregationists and black Protestants were in the same ethnic group. Jones counters this by saying blacks were mere tools of Jews during integration. The civil rights revolution was actually an ethnic battle! 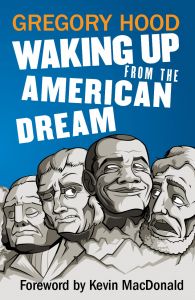 You can buy Greg Hood’s Waking Up From the American Dream here. [4]

The gist of my talk at the Sam Francis memorial was that the culture wars are simply not understandable in racial terms. The different sides in the culture wars may have used race as a pretext, but the identity of the antagonists was ethnic, not racial in the sense commonly portrayed in the media. In applying the ethnic calculus to this period of history, we discover that the blacks, even if they were the most visible player in the civil rights phase of the culture wars of the ‘60s, were ultimately the pawn of other groups, which were just as white as the groups they attacked.

Jones, by the way, believes integration was anti-Catholic ethnic cleansing engineered by Protestants and Jews. According to this thesis, blacks were also victims of this scheme.

Jones dismisses a more reasonable ethnic paradigm of black, Jew, and white Gentile because Jews are the only group who proudly celebrate their identity. The others don’t see themselves as white or black, apparently.

The Triple Melting Pot is anachronistic in modern America. Ethnic enclaves are, for the most part, a thing of the past. Most whites grow up in mixed religious communities and interfaith marriage is at an all-time high [5]. Jones claims that people stay with their faith most of their life. In reality, most American Christians change denominations [6] throughout their lives. The only people who insist on the fundamental differences between Catholics and Protestants are LARPy Catholic intellectuals and hardcore evangelicals. Most whites today don’t see any real differences in the faiths, and they don’t base their identity around religion. Many whites are secular and rarely attend. The parish is no longer at the center of American life.

Ever since the first settlers encountered the Indians, race has shaped American life. Whites were always likely to take the side of their fellow whites against non-whites. The chief differences in early America were white, red, and black. America was founded by Protestants who saw their faith as a foundational component to America, but white Catholics were always included within the body politic. One of the signers of the Declaration of Independence was the Catholic Charles Carroll.

The animosity between Catholics and Protestants primarily erupted with mass Catholic immigration in the mid-19th century and was a major factor in American life for the next 100 years. However, the election of John F. Kennedy in 1960 and the disappearance of ethnic enclaves has largely put this animosity to pasture. White Catholics and Protestants are not divided by separate communities or cultures. Religious differences don’t matter to the vast majority of Americans.

America also has a plethora of other religions now thanks to mass immigration. Jones notes this, but insists we have to stick to the Triple Melting Pot for unknown reasons. Trust the random Herberg book!

The essay veers awkwardly from one argument to the next, but the overall purpose is to insult Francis. He castigates the paleocon as a materialist who failed to understand logos. Jones also hilariously claims that Francis conjured up “revolutionary fantasies based on phantasms of the mind which had only a tenuous connection to reality.” This comes from a man who believes the sun revolves around the Earth [7].

If the cheap shots weren’t enough, Jones makes sure to celebrate his insulting speech at Francis’s memorial as a heroic fusillade against philo-Semitic racists. At the 2005 memorial in Francis’s honor, Jones decided to ignore remembering the deceased writer. Instead, he ranted about the stupidity of race realism and how bad Jews are. Francis’s family and friends were rightfully appalled by this lack of decorum.

In Jones’s telling, he was a brave Cassandra warning the evil racists of the perils in their thinking. The evil racists — who are also cowards! — couldn’t face his bold truth-telling at an event to honor a dead friend, not Jones’s narcissism. Jones self-righteously says his warnings went unheard and this led to Charlottesville:

Sam Francis, with the help of Paul Gottfried, inspired Richard Spencer to hand out spears to the white boys and point them in the direction of the legal machine gun nest in Charlottesville, where they all got mowed down.

Jones builds his essay around appealing to identitarians. He says the war on whites is real and mass immigration hurts America. But his goal is to tell you these things don’t matter; all that matters is that you join the Catholic Church. It’s clear that Jones wants to subvert the Dissident Right and direct it into his own niche project. His aims have nothing to do with preserving our civilization. Then again, Jones believes race isn’t a real concept. Maybe that should be expected of a thinker who doesn’t even believe in heliocentrism.

There are many great Catholic writers for young nationalists to turn to. De Maistre, Chateaubriand, Bonald [8], etc. All of these thinkers offer valuable insight into life and faith.

E. Michael Jones only offers insight into his own ego.