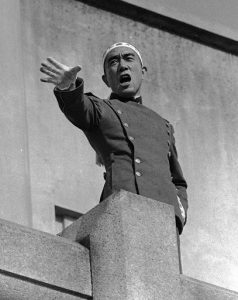 To the members of Tatenokai [Shield Society]:

Among you there are both those who have stayed with us consistently since the founding of our organization and those of the fifth class who have been with us for only nine months. Yet as far as I’m concerned, regardless of the degrees of your involvement and experience, we are all comrades of a shared identity who have gone beyond the difference of ages and intended to march toward a common ideal. As I have frequently tried your resolve with strict language, I have had this dream in my mind that all of us members unite as one, rise up for justice and a rightful cause, and implement the idea of our organization. This is exactly the biggest dream of my life. In order to return Japan to its true and authentic state, we must concentrate all the force of Tatenokai and carry out the cause of ours.

For this purpose, you have well endured the rigorous training without any complaint. In today’s youths, I don’t think there are any others who could set up pure goals and strive for them with a thorough endurance for all physical hardships like you did. By excluding empty theories and talks typical of leftwing revolutionary youths and making the silent action our intention, we have together practiced the Way of Warriors. When the time comes, we will definitely prove the real value of our Tatenokai before the eyes of all the Japanese people.

However, the opportuneness of timing has failed to appear. The opportunity was lost for us to rise up and act as a whole for our idea. Under the façade of prosperity and stability, day after day, Japan is showing cancerous symptoms of losing its soul, perhaps irretrievably, yet we could only watch from the sidelines and do nothing. At the time when our action was most required, the circumstances had refused to stand on our side.

To represent this unceasing feeling of pain and fury through the action of a spearhead-like small number of our members, and to limit the sacrifices to a minimal degree, there is only one way left which I have kept unknown to most of you. It was by no means a betrayal of you on my part. Although Tatenokai comes to an end now and is dismissed, were it not for the belief that the ideal of the small number would bear fruit for the future of all of you who have grown, how could I decide to take such an action? I wish you would all think about this carefully.

Even if Japan sank to the bottom of decadence, you would be the last youth group in Japan who had learnt the spirit and received the cultivation of the warrior. When you give up your ideals, Japan dies.

Throughout these years, I have only thought about and endeavored to teach you the pride of man. I earnestly hope that those who had once belonged in Tatenokai would never forget in their lifetime the meaning of the word “the Japanese Men.” What you have obtained in your youthful time is a treasure of your lifetime, and you should never abandon it.

Hereby again I would like to express my deep respect for your lofty ideal and my utmost thanks to your sharing of toil and hardship with me.